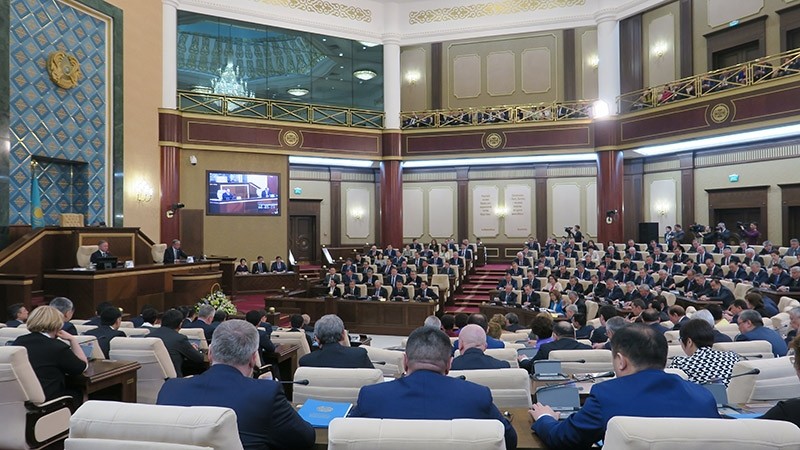 Kazakhstan's parliament on Monday approved a package of amendments to the constitution to reduce presidential powers in favor of lawmakers and the cabinet, a move that could help lead to an eventual political transition.

The 23-article bill was passed nearly unanimously by parliament, with just one of the 105 lawmakers failing to vote in favor, the Kazinform news agency reported.

President Nursultan Nazarbayev had already endorsed the proposed changes, and they will become law once he has signed the amendments which were passed by parliament in a second and final reading.

Addressing parliament on Friday, Nazarbayev, 76, said the preparation of the draft had been "open and transparent".

He said the amendments "significantly strengthen" parliament's role, including in the selection of ministers, and would make efforts towards economic and political modernization "more effective".

Kazakhstan, an exporter of oil and metals, is the only former Soviet republic that is still run by its communist-era leader. Aged 76, Nazarbayev has not identified a clear successor and the uncertainty has caused concern for investors.

The devolution of some presidential powers could make it easier for the political elite to manage a succession by splitting key roles between different players rather than allowing one successor to concentrate power in his or her hands.

At the same time, the reform is unlikely to change Nazarbayev's position as a powerful ruler.

Nazarbayev said this year that the proposed constitutional reforms would allow parliament to form a cabinet which would intern have more powers to manage the economy.

Under the current constitution, Nazarbayev appoints all cabinet members. His Nur Otan party dominates parliament, which has no serious opposition parties.

Following the reforms, the president will focus on strategic matters, foreign policy and national security and will serve as an arbiter between the branches of power, Nazarbayev has said.