North Korea and Malaysia ban each other's citizens from leaving 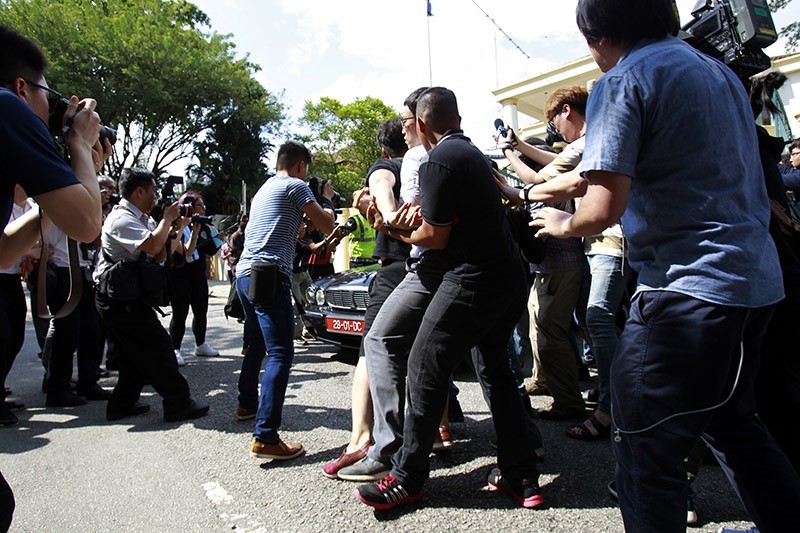 That was followed quickly by Malaysia saying North Korean embassy staff were barred from leaving its country. Malaysia had already expelled the North Korean ambassador on Monday.

The North's Foreign Ministry told the Malaysian Embassy in Pyongyang that it would temporarily ban the exit of Malaysian citizens now in the North, according to the official Korean Central News Agency.

It said the exit ban will be valid "until the safety of the diplomats and citizens of (North Korea) in Malaysia is fully guaranteed through the fair settlement of the case that occurred in Malaysia."

Malaysia is pursuing several North Korean suspects allegedly involved in the killing, including a diplomat at the North's Embassy in Kuala Lumpur. Malaysia has not accused the North of being behind the killing of Kim Jong Nam at Kuala Lumpur's airport three weeks ago, but South Korean has.

"This abhorrent act, effectively holding our citizens hostage, is in total disregard of all international law and diplomatic norms," Malaysian Prime Minister Najib Razak said in a statement.

The North said Malaysian diplomats and citizens "may work and live normally under the same conditions and circumstances as before" during the period of the temporary exit ban.

It also said that the Malaysian ambassador would be expelled, although he has already been recalled to Malaysia.

Kim Jong Nam died less than 20 minutes after two women wiped VX nerve agent on his face at Kuala Lumpur airport on Feb. 13, authorities say. The women, one from Vietnam and one from Indonesia, have been charged with murder.

North Korea has denied any role in the killing and accused Malaysia of conspiring with its enemies. North Korean Ambassador Kang Chol rejected a Malaysian autopsy that found Kim was killed with VX, a banned chemical weapon.

"It means that we are firm in defending our sovereignty and dignity," Najib said. "Don't ever insult our country and don't try to cause disruptions here."

Malaysian authorities declared Kang "persona non grata" on Saturday and gave him two days to leave the country. He arrived late Monday afternoon at the Kuala Lumpur airport, where he told reporters that Malaysia was doing "great harm" to the countries' relations.

Malaysia's finding that VX killed Kim boosted speculation that North Korea was behind the attack. Experts say the oily poison was almost certainly produced in a sophisticated state weapons laboratory, and North Korea is widely believed to possess large quantities of chemical weapons, including VX.

North Korea is trying to retrieve Kim's body, but has not acknowledged that the victim is Kim Jong Un's half brother, as Malaysian government officials have confirmed.

Ri Tong Il, a former North Korean deputy ambassador to the United Nations, has said Kim probably died of a heart attack because he suffered from heart disease, diabetes and high blood pressure. Health Minister Subramaniam Sathasivam said pathologists have ruled that out.

The two women accused of poisoning Kim say they were duped into thinking they were taking part in a harmless prank.

The escalating diplomatic row already prompted Malaysia to cancel last week a rare visa-free travel deal with the North and to ban its national football team from playing an Asian Cup qualifying match in Pyongyang, citing security threats. Pyongyang has accused Malaysia of plotting with the North's arch-rivals Seoul and Washington to launch a "smear campaign" to tarnish the reputation of the country and its young leader.