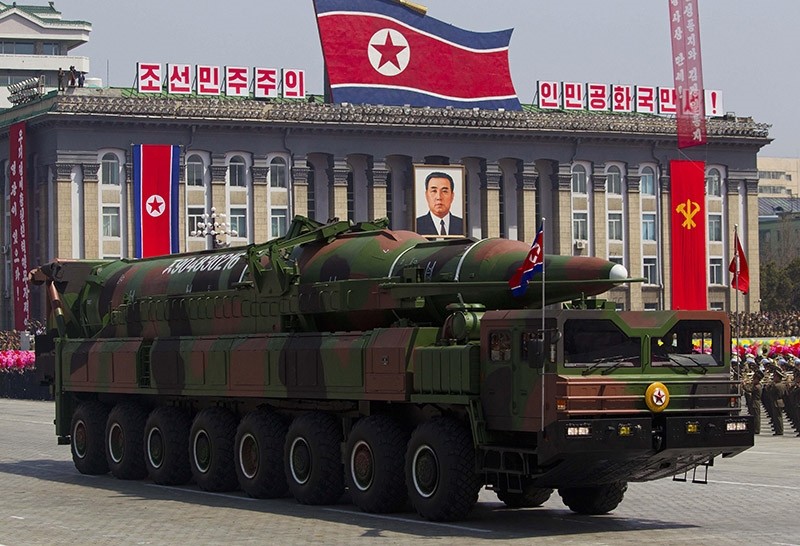 A North Korean vehicle carrying a missile passes by during a mass military parade in Pyongyang's Kim Il Sung Square to celebrate the centenary of the birth of the late North Korean founder Kim Il Sung. (AP File Photo)
by Compiled from Wire Services Mar 08, 2017 12:00 am

A senior Chinese diplomat said Wednesday that tensions on the Korean peninsula were like "two accelerating trains" headed for collision, saying the way to defuse the crisis required action from both sides.

Foreign Minister Wang Yi proposed that North Korea could suspend its nuclear and missile activities in exchange for a halt in joint military drills conducted by the U.S. and South Korea.

Yi's proposal came after a cascade of events that has led to a dramatic spike in tensions in the region, including a volley of North Korean missile tests that flew provocatively close to Japan.

China is particularly concerned over the deployment this week of America's THAAD defence system which is being rolled out in South Korea as a shield against the growing missile threat.

"The two sides are like two accelerating trains coming toward each other with neither side willing to give way," Wang said at a press conference on the sidelines of China's annual parliament session.

"The question is: are the two sides really ready for a head-on collision? Our priority now is to flash the red light and apply the brakes on both trains."

He proposed that North Korea "suspend its nuclear and missile activities in exchange for the halt of the large-scale US-ROK exercises," using the acronym for South Korea.

Pyongyang blasted at least four missiles across the sea toward Japan on Monday, and three of the rockets splashed down into waters within Japan's Exclusive Economic Zone.

Seoul and Washington have begun annual joint exercises that always infuriate Pyongyang, and the US has started deploying an anti-missile system directed at North Korea but which Beijing has taken as a threat to its own defence interests.

Wang said China's proposal could help bring the US and North Korea back to the "negotiating table" for talks on ending Pyongyang's weapons programmes.