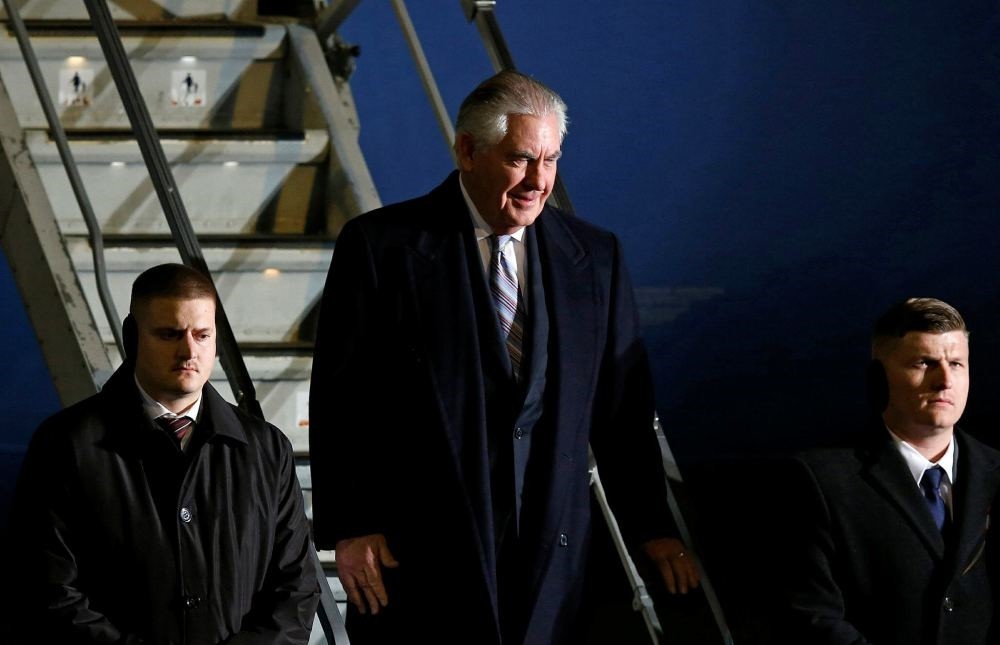 U.S. Secretary of State Rex Tillerson arrives at Haneda international airport in Tokyo, as the first stop of his tour in Asia, March 15.
by Compiled from Wire Services Mar 16, 2017 12:00 am

Under the shadow of North Korea's nuclear posturing, U.S. Secretary of State Rex Tillerson promised to take a tough line on Kim Jong-un's isolated regime as he began a tour of the region, first stopping in Japan

On his first trip to Asia as top U.S. diplomat, Rex Tillerson wants to forge cooperation with Japan, South Korea and China against the nuclear threat from North Korea and demonstrate "America First" does not mean a U.S. diplomatic retreat from the volatile region.

Secretary of State Tillerson has promised to take a tough line on Kim Jong-un's isolated regime as he talks to allies Japan and South Korea and to rival great power China. The former oilman will also talk commerce, after President Donald Trump's belligerent campaign rhetoric raised the specter of a trade war between the United State and China.

Tillerson will find shared anxiety at the North's saber-rattling but less agreement about how to deal with it, and unresolved questions about how the United States and China, the world's two largest economies, can manage growing differences.

Japan and South Korea, which host American troops and are already within range of North Korean missiles, support U.S. efforts to increase diplomatic and economic pressure on Pyongyang. The three navies were also conducting missile defense information-sharing drills Wednesday in seas east of the divided Korean Peninsula and north of Japan to promote interoperability, the U.S. Navy's 7th Fleet said.

A nuclear-powered U.S. aircraft carrier arrived in South Korea yesterday for joint military exercises, the U.S. Navy said, in the latest show of force against the North.

The USS Carl Vinson berthed in the southern port of Busan as U.S. Secretary of State Rex Tillerson began a tour of the region, where tensions have spiked in recent weeks with missile launches from the nuclear-armed North and the brazen assassination of Kim Jong-Un's half-brother in Malaysia.

Pyongyang has long condemned the annual joint drills, which involve tens of thousands of troops, as provocative rehearsals for invasion, while Seoul and Washington insist they are purely defensive in nature.

The aircraft carrier and a U.S. destroyer will conduct naval drills including an anti-submarine maneuver with South Koreans in waters off the Korean peninsula as part of the annual Foal Eagle exercise. Yonhap news agency said the navy drills will kick off next week.

"The importance of the exercise is to continue to build our alliance and our relationship and strengthen that working relationship and interoperability between our ships," Rear Admiral James Kilby, commander of USS Carl Vinson Carrier Strike Group 1, told journalists.

He said training opportunities in the region were "world-class" and allow the U.S. to "build upon our strong alliance" with the South.

The North's official KCNA news agency said Tuesday that "all U.S. military strategic assets including its aircrafts are within the cross hair of our powerful, precision striking means".

In an apparent response to the exercises, Pyongyang launched four ballistic missiles last week -- with three landing in waters that are part of Tokyo's exclusive economic zone -- and described them as a drill for an attack on U.S. bases in Japan.
RELATED TOPICS