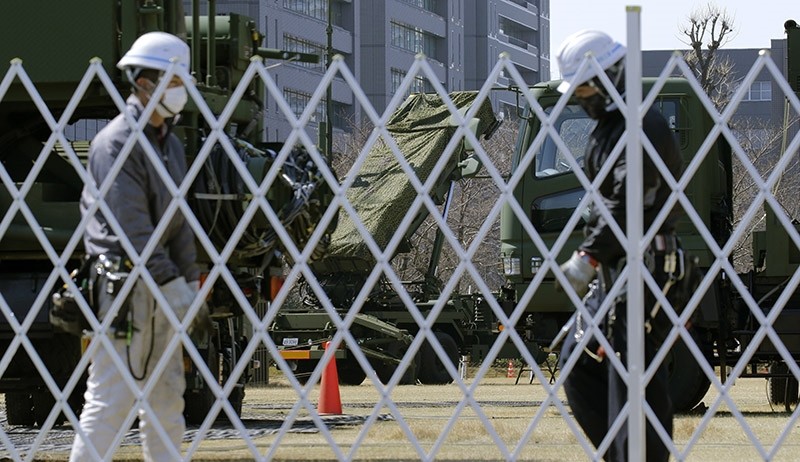 Workers set up a fence around the PAC-3 Patriot missile unit deployed against North Korea's missile firing at the Defense Ministry in Tokyo, Wednesday, March 22, 2017. (AP Photo)
by Associated Press
Mar 22, 2017 12:00 am

North Korea's latest missile launch appeared to have ended in a failure on Wednesday, South Korean defense officials said, three days after the North claimed a major breakthrough in its rocket development program.

The reported launch failure comes as the North is angrily reacting to ongoing annual U.S.-South Korean military drills that it views as an invasion rehearsal. Earlier this month, North Korea fired four ballistic missiles that landed in waters off Japan, triggering strong protests from Seoul and Tokyo.

On Wednesday morning, the North fired a missile from the eastern coastal town of Wonsan but the launch was believed to have ended in a failure, Seoul's Defense Ministry said in a statement.

The ministry said it was analyzing what type of missile was launched but gave no further details. Yonhap news agency reported the missile was believed to have exploded in mid-air.

The failure might mean that the missile is a newly developed one the North has not deployed, according to South Korean media. Last year, the country suffered a series of embarrassing failed launches of its new medium-range Musudan missile before it successfully test-fired one.

The North's state media said Sunday that it had conducted a ground test of a new type of high-thrust rocket engine, which it hailed as a breakthrough for the country's space program. Washington, Seoul and others view the North's space program as a cover for its banned long-range missile development program.

North Korea is pushing hard to upgrade its weapons systems to cope with it calls U.S. hostility. Many weapons experts say the North could have a functioning nuclear-tipped missile capable of reaching the continental U.S. within a few years. The North carried out two nuclear tests last year.