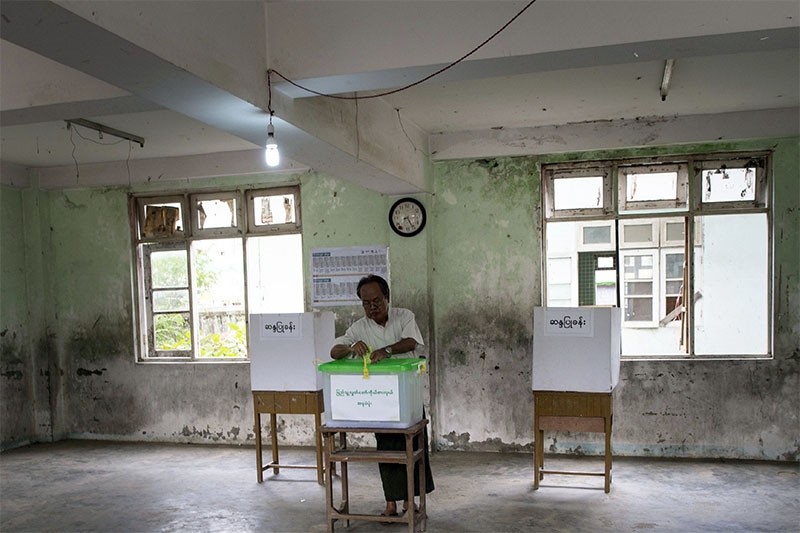 It is the first by-election since the new government led by Suu Kyi's National League for Democracy (NLD) took office last year.

Dozens of voters lined up outside a polling station in Hlaing Thar Yar township of Yangon region early Saturday, but public interest on the election is low.

"I am not voting this time," Min Min Tun, 28, a resident of Hlaing Thar Yar, told Anadolu Agency Saturday.

"The political landscape can't be changed whatever the result is," said the NLD member while sitting on his trishaw waiting for passengers.

NLD won a landslide victory in the 2015 general election, the first openly contested poll in Myanmar - also known as Burma - in 25 years.

The civilian government, during a year in office since March last year, has faced criticism for slow reform process in almost all sectors.

The party will face its toughest challenge to Ann township of Rakhine state where nine candidates are competing including Aye Maung, chairman of nationalist Arakan National Party (ANP).

A total of 94 candidates are competing in the by-election to fill 19 vacant parliamentary seats caused by the appointment of lawmakers to cabinet positions or the death of lawmakers.

Over two million voters, less than five percent of the country's population, are eligible to vote in the by-elections

Due to the lack of public awareness, civil society organizations that are monitoring the election predicted it could result in lower turnout at polls.