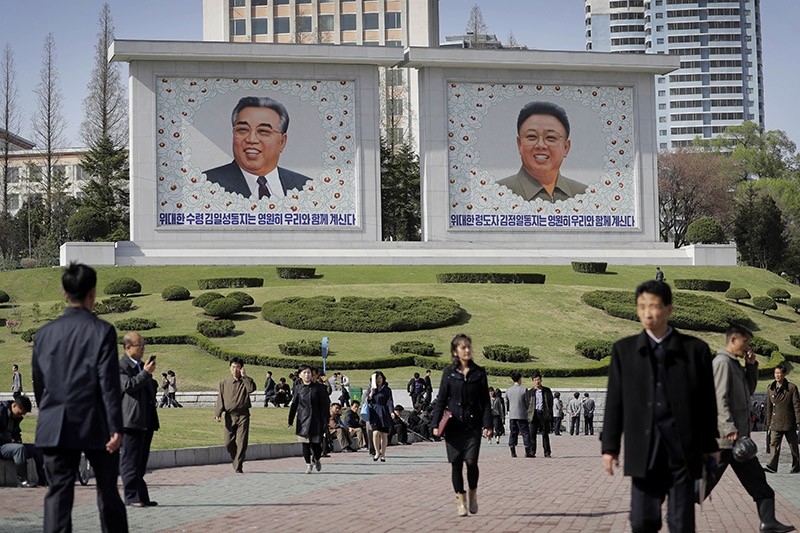 North Korean leader Kim Jong-Un was shown portraits of his grandfather and father in front of an audience of tens of thousands of soldiers and civilians during a parade highlighting military strength aimed at Washington, Seoul, Tokyo and others this weekend.

The parade, in addition to a show of military prowess, was a domestic affirmation of Kim family authority over the country, analysts say.

Banners hung from buildings around Kim Il-Sung Square, which is named for the founder of the Democratic People's Republic of Korea -- as the North is officially known -- and its ruling dynasty.

One offered Kim Il-Sung "eternal glory", with another reading: "Let us safeguard with our lives the central committee of the party headed by the great comrade Kim Jong-Un."

Despite dying in 1994, Kim Il-Sung remains the titular leader of the North, where he is "Eternal President", and his "Juche" or "self-reliance" philosophy - centered on the concept that "man is the master of all things" - is proclaimed as its guiding tenet.

In a speech ahead of the march, senior Kim aide Choe Ryong-Hae declared it "a loyal report to the great president Kim Il-Sung and (his son and successor) the great leader Kim Jong-Il that we are maintaining the revolutionary cause."

Pictures of the two men are ubiquitous throughout the country, where Supreme Leader Kim Jong-Un -- still only in his 30s -- is consistently referred to as the "respected general." 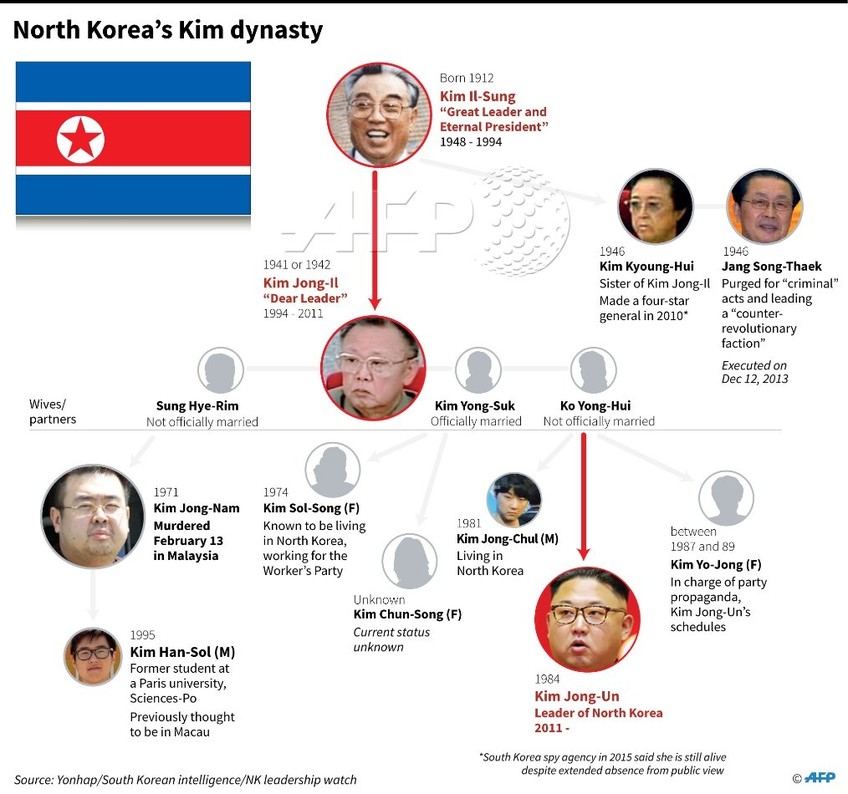 Religious terminology is prominent at Kim Il-Sung's birthplace, a heavily restored grave-keeper's cottage at Mangyongdae, a rural idyll overlooking islands in the stream of the Taedong river outside the capital.

"This is the sacred place that all the people of the world look up to," said guide Chon Hyon-Ran, who referred to April 15 as Kim's "birthdaymas".

"Relics" of family life are on display, from Kim's great-grandfather's pipe to an inkstone used by the future president.

A steady stream of pilgrims come to pay their respects -- the site receives 1.8 million visitors a year, Chon said -- and drink "holy water" from the Kim family well.

Kim was born when his country was a Japanese colony, and according to the official narrative, his first written phrase -- at the age of four -- was "The independence of Korea."

Aged only 13, he left Mangyongdae "determined not to return before our Korea became independent", led the armed struggle against Tokyo's forces, and "finally liberated our country in 1945," still aged only 33.

No mention is made of the US' role in Japan's World War II defeat, or that of the Soviet Union in installing him in the North.

At a pavilion on the estate, singers from the district women's league in flowing traditional dresses rehearsed anniversary praises for Kim.

"In our country, even young children commemorate the birthday of the president Kim Il-Sung," said Pak Won-Ae, her voice trembling with emotion. "Under the warm love of the president, I have found my truly happy life today."

The Kim family is not without its black sheep -- Kim Jong-Un's renegade half-brother Jong-Nam was murdered in Malaysia in February, with both Seoul and Kuala Lumpur blaming Pyongyang.

The nationwide celebrations for the two men's grandfather are a means of control in themselves as well as a declaration of legitimacy, according to one Asian-based diplomat.

"They do these events because the events themselves are what they do. Pretty much everybody gets to do something for it and probably people quite enjoy it," he said.

"It's a sign to the world of everything they wish to project about the regime," he added -- apparent military power and a supposedly successful economy despite sanctions, along with "Kim's love of the people and the people's love of Kim."