Indonesia to move capital from Jakarta amid heavy congestion, threats of sinking 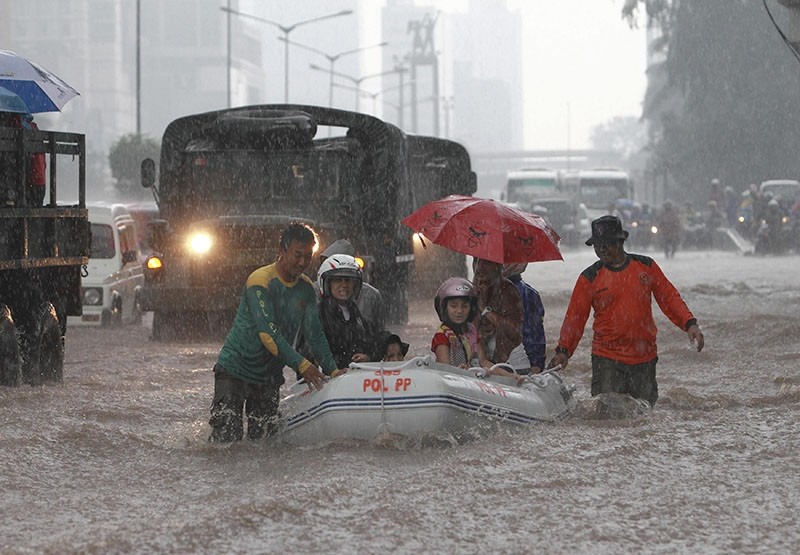 People sit on an inflatable raft as they move through a flooded street to try to reach higher ground, in the business district in Jakarta January 18, 2013. (Reuters Photo)
by Daily Sabah with Agencies May 03, 2017 12:00 am

Indonesia is assessing projects to remove its capital from Jakarta due to a number of infrastructure problems and to expand economic and cultural development to other regions of the country.

The Ministry of National Development Planning of the Southeast Asian nation said in a statement that there are efforts to replace the capital amid ongoing problems in Jakarta, including earthquakes, flooding and congestion.

The ministry is expected to come up with a list of potential candidate cities by the end of 2017.

Meanwhile, various sources suggest that Palangkaraya, a city located in the center of the archipelago nation's largest island Borneo (Kalimantan), is the top candidate.

With its rich natural resources and large area that would allow planned expansion, moving the capital to Palangkaraya was proposed by President Suharto and had been on the country's agenda since the 1950s.

Indonesia is the world's fourth most populous country with a population near 260 million, who live on 15,000 islands that span over the equator line with over 5,300 kilometers of distance between the western and eastern coasts. Palangkaraya is located in a more central location than Jakarta, which is located on the northwestern tip of Java Island.

Kalimantan is assessed to have plenty of untapped natural resources and moving the capital to the island could have a booming effect on the Indonesian economy.

Perhaps the biggest problem before current capital Jakarta, one of the world's largest megacities, is providing water from the aquifer that lays under the city, which leads a surface level degrading of 25 centimeters each year and subsequent floods in Northern Jakarta by the Java Sea.