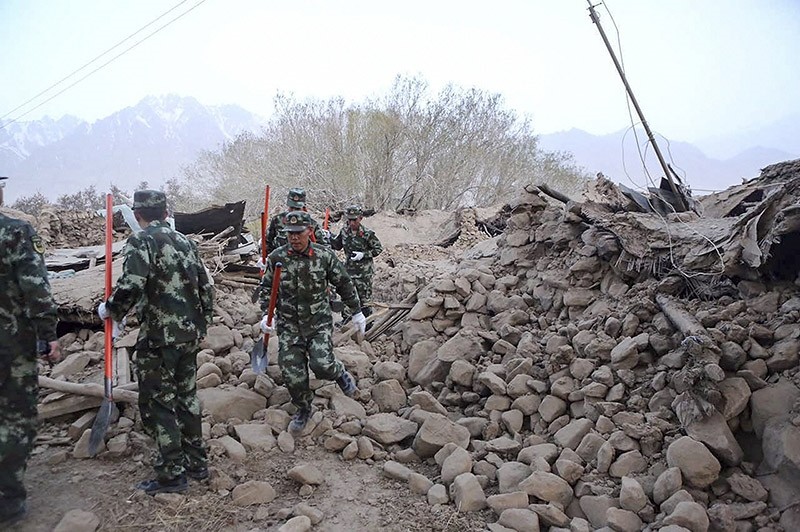 In this photo released by Xinhua News Agency, soldiers walk past damaged houses following an earthquake in Kuzigun Village in Taxkorgan County, northwest China's Xinjiang Uygur Autonomous Region, Thursday, May 11, 2017. (AP Photo)
by Compiled from Wire Services May 11, 2017 12:00 am

The morning quake struck in Taxkorgan county, a remote mountainous area that borders Tajikistan, Afghanistan and Pakistan in China's Xinjiang region. The Xinjiang Earthquake Administration said 23 people had been injured, including one seriously, in the lightly populated area.

Most houses in the area were made of wood and mudbricks or rock, it said.

The U.S. Geological Survey said the 5.4-magnitude quake struck at a depth of 10 kilometers (6 miles) at 5:58 a.m. Thursday (2158 GMT Wednesday). Shallow quakes cause greater shaking at the surface, which can cause more damage.

Rescuers were searching for people trapped in the rubble in Quzgun, the worst-hit village, which has a population of 449, Wang said.

More than 9,000 people were relocated in the region while 1,000 soldiers and 1,500 civilians were participating in rescue efforts, the agency said.

The People's Daily posted a photo on Twitter of a building in complete ruins. Other photos, all from the official earthquake monitoring centre, show ceiling panels on the ground in one building and products on the floor in a store.

The county has a population of around 33,000, and is notable for being a stop on the Karakoram Highway, built along the ancient Silk Road connecting China's far western city of Kashgar to the Pakistani capital of Islamabad.

The official Xinhua News Agency said there had been frequent aftershocks.

Earthquakes are common in China's west, although the low population density there often means casualties are low. However, in 2003, a 6.8-magnitude quake in a nearby county to Thursday's quake killed 268 people.

China's deadliest earthquake this century, a 7.9 magnitude temblor with a depth of 19 kilometers (12 miles), struck Sichuan province in May 2008, killing nearly 90,000 people.