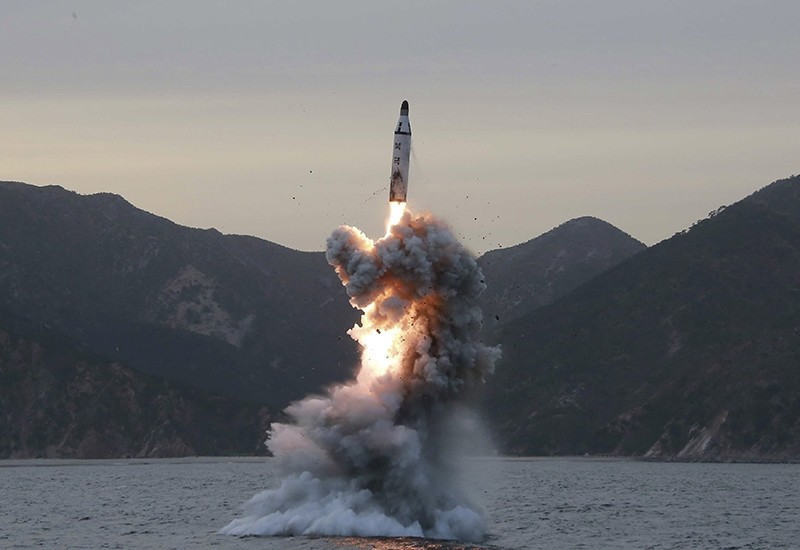 An undated file photo released on 24 April 2016 by North Korean Central News Agency (KCNA) shows an 'underwater test-fire of strategic submarine ballistic missile' conducted at an undisclosed location in North Korea (EPA Photo)
by Compiled from Wire Services May 14, 2017 12:00 am

North Korea fired on Sunday an unidentified projectile from a region near its west coast, South Korea's military said.

The nature of the projectile is not immediately clear, a South Korean military official said by telephone.

Yonhap news agency reported the projectile launched appeared to be a ballistic missile.

The launch took place at a region named Kusong located northwest of the capital, Pyongyang, where the North previously test-launched its intermediate-range missile it is believed to be developing.

The launch, if it is confirmed to be test-firing of a ballistic missile, is the first in two weeks since the last attempt to fire a missile ended in a failure just minutes into flight.

The North attempted but failed to test-launch ballistic missiles four consecutive times in the past two months but has conducted a variety of missile testing since the beginning of last year at an unprecedented pace.

Weapons experts and government officials believe the North has accomplished some technical progress with those tests.

U.S. President Donald Trump warned in an interview with Reuters in late April that a "major, major conflict" with the North was possible, but he would prefer a diplomatic outcome to the dispute over its nuclear and missile programmes.

The launch is the first since a new liberal president took office in South Korea on Wednesday saying dialogue as well as pressure must be used to ease tensions on the Korean peninsula and stop the North's weapons pursuit.