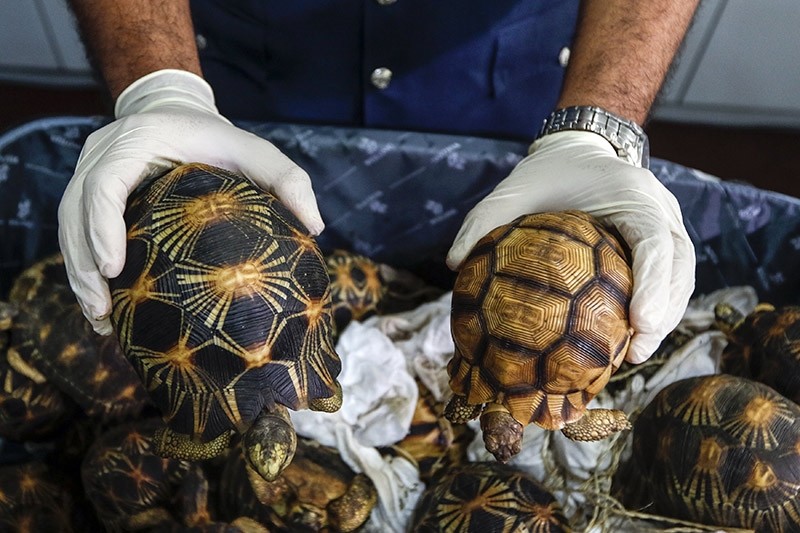 Customs agents in Malaysia stopped an attempt to smuggle hundreds of the world's most endangered tortoises into the country from Madagascar, a senior official said Monday.

All of the reptiles were found alive, he added.

"It is a big haul. It could be for the local market or for re-export. We are investigating," the enforcement agency said in a statement.

"Based on public tip-off, customs officials raided the cargo area of the airport and found five suspicious crates," the statement added.

"It had arrived at KLIA on an Etihad Airways flight from Antananarivo airport in Madagascar."

The golden-domed ploughshare tortoise is native to Madagascar and is the most endangered tortoise on the planet as a result of poaching.

Madagascar's radiated tortoise – considered to be one of the most beautiful species of the animal -- is also rapidly nearing extinction due to rampant hunting for its meat and the illegal pet trade.

Abdul Wahid said the contents of the crates were labelled as stones and the address of the recipient was found to be false.

Malaysia bans the import of critically endangered animals. Anyone found guilty of the offence can be jailed for up to three years and fined.

Elizabeth John, senior communications officer of the Wildlife Trade Monitoring Network (Traffic), said the tortoise haul followed on the heels of other busts of animal products originating from Africa, including rhino horn and pangolin scales.

"With the string of recent seizures of wildlife from Africa, Malaysian enforcement agencies are sending a strong warning to smugglers that they mean business," she told AFP.

John said the routes used by traffickers in recent cases point to a need for greater scrutiny of airports in the Middle East.