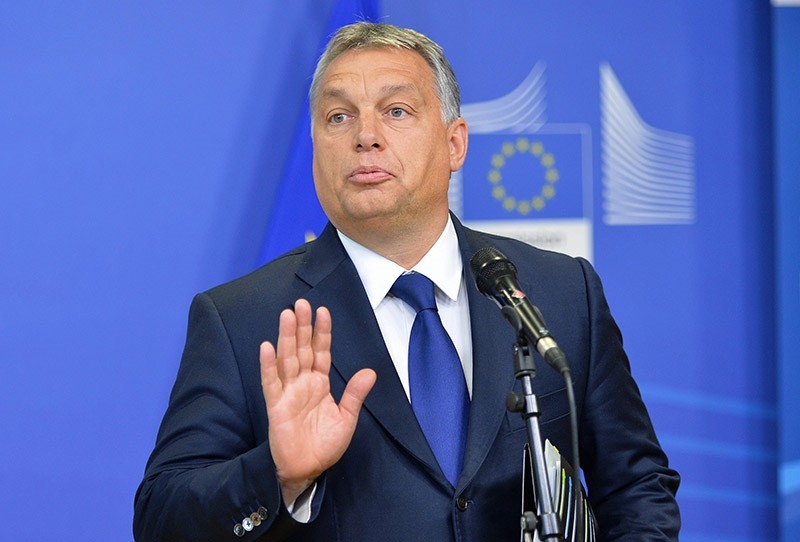 The billionaire philanthropist has often been accused by Orban over the past two years of interfering in European Union affairs by backing open borders and pro-refugee policies and organizations.

Orban's government passed a new law in a fast-track procedure in April that could force a university founded by financier George Soros out of the country.

He accused the Central European University of violating regulations in awarding its diplomas, an allegation the college firmly rejected.

Under the law, foreign universities must have a campus in Budapest and in their home country. The CEU, which only operates in the capital, is the only international college with no arm elsewhere.

"European policy is distorted... The essence of Europe is not in Brussels but in the member states and if the institutions don't respect the member states, that is depressing," he said in an interview on public radio.

The strongman's latest attack came after the European Parliament on Wednesday passed a resolution calling on the European Commission to trigger a legal procedure known as Article Seven of the EU treaty.

The article, referred to as the bloc's "nuclear option," could lead to the suspension of Hungary's voting rights in the Council of Ministers, the EU's highest decision-making body.

However, the EU would need unanimity of member states to establish that a violation has taken place and ally Poland would likely block it.

In addition, the European Commission, the executive of the 28-nation EU, is advocating more dialogue with Budapest to iron out disagreements, saying last month it saw no "systemic threat" to the rule of law in Hungary.

Nonetheless, Orban took aim at the parliamentary resolution, saying on public radio it was "the mark of a mistaken policy."

The resolution, which passed by 393 votes to 221 in Strasbourg, said "recent developments in Hungary have led to a serious deterioration in the rule of law, democracy and fundamental rights which is testing the EU's ability to defend its founding values".

It was backed by 68 lawmakers from the European People's Party (EPP) group, which includes Orban's right-wing Fidesz party.

Orban said the real reason behind the resolution was the issue of migration.

Budapest and Brussels have been at odds over Hungary's stance on immigration, described as a "Trojan horse of terrorism" by Orban.

The prime minister accused Soros of masterminding an "intellectual, political, and economic interest group in Europe" who want to flood the continent with hundreds of thousands of migrants.

The EP resolution also called for strict monitoring of the use of EU funds for Hungary, and the suspension of controversial legislation on higher education and NGOs.

Last month, the European Commission launched legal action against Hungary over a law that could shut the prestigious Soros-founded Central European University in Budapest.