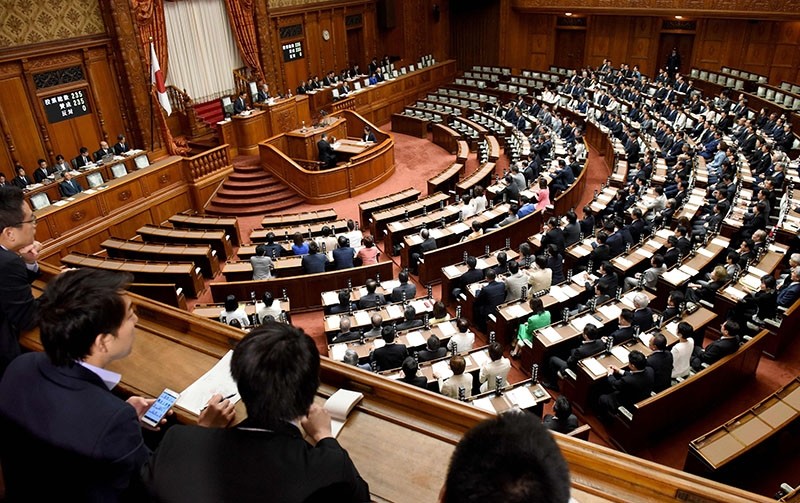 Members of Japan's upper house of parliament cast their ballots for a bill during the plenary session in Tokyo on June 9, 2017. (AFP Photo)
by Compiled from Wire Services Jun 09, 2017 12:00 am

Japan's parliament on Friday passed a law allowing Emperor Akihito to become the country's first monarch to abdicate in 200 years, but put off a debate over how to tackle the shrinking royal population and whether to allow women to ascend the throne.

In veiled language, the 83-year-old emperor expressed his wish to abdicate last August, citing his old age and health.

Under the law enacted Friday, his abdication must take place within three years. It is expected that the actual abdication will take place on or about New Years' Day, 2019, when Akihito would turn 85 and mark nearly 30 years on the throne. No date has been announced yet.

The legislation that passed the diet is limited to the present emperor. The conservative government of Prime Minister Shinzo Abe was reluctant to make broader changes to centuries-old traditions by allowing any emperor to abdicate.

Abdications were common in the pre-modern age, with retired emperors sometimes manipulating governments from behind the scenes. That was one reason Abe declined to support a more sweeping rule.

Another reason was the deep-seated fear of many conservatives, of whom Abe is sympathetic, that a broader law would reopen the vexing question of women becoming reigning empresses.

Conservatives strongly oppose this, even though polls consistently show by wide margins that it is fine with the public.

Current succession rules allow only men from the paternal bloodline to ascend the 2,000-year-old Chrysanthemum Throne. Akihito's son, 57-year-old Crown Prince Naruhito, is next in line. Women, but not men, are forced to renounce their royal status if they marry a commoner, a point highlighted by recent news that one of Akihito's granddaughters, Princess Mako, plans to marry her college sweetheart.

Naruhito's only child is a girl, and his younger brother, Prince Akishino, has two adult daughters and a 10-year-old son, Hisahito. This means only one of the emperor's four grandchildren is an eligible heir.

After Naruhito's daughter was born, a government panel discussed the possibility of allowing female ascension, but the talk quickly faded after Hisahito's birth.

However, the government is open to possible changes in the succession laws to permit princesses to keep their royal titles if they marry outside of the imperial family.

The recently passed legislation calls on the government to urgently consider the matter. "The creation of female-led imperial branches … can no longer be put off," the legislation states.

Akihito's coming abdication has rekindled concerns about a shortage of heirs.

The Abe government avoided taking up divisive issues involving the status of female royals, which would have required a time-consuming and broader overhaul of the 1947 Imperial House Law.

To secure opposition support, the ruling party did agree to a non-binding attachment to the bill calling on the government to study ways to improve the status of princesses.

That could include allowing them to keep their titles so that they can make up for the declining royal membership and continue to perform some royal family public duties.

The abdication law applies only to Akihito and expires in three years, to avoid putting future monarchs at risk of forcible abdication due to political manipulation. The law was needed because the 1947 Imperial House Law does not provide for abdication.

The last emperor to abdicate was Kokaku in 1817.

The Japanese emperor has no real powers. Officially, he is a symbol of the country's unity.

He receives ambassadors, opens parliament, gives new Cabinet ministers their seals of office, and acts as Japan's griever-in-chief in natural disasters. He also represents Japan abroad, most recently in a state visit to Vietnam.

The current imperial family traces its beginnings back more than 2,000 years, by far the longest unbroken line anywhere in the world.

There are 18 members of the imperial family, of which 13 are women.

Akihito was born in 1933 just as Japan was embarking on its militaristic sweep across Asia, and was 11 when the war ended in defeat.

His father was allowed to remain on the throne after Japan's defeat, but his status was downgraded from semi-divine sovereign to a figurehead with no political power.

Akihito embraced the role and tried to use it to help heal the scars of the war while remolding one of the world's oldest monarchies for a democratic age.

Even before he assumed the throne, Akihito broke with tradition when he married the daughter of a wealthy flour magnate in 1959, becoming the first imperial heir to wed a commoner.

The emperor and his wife Empress Michiko are seen as being the more accessible face of a monarchy that largely remains in the shadows, unlike the British royals.

Akihito is barred from commenting on politics, but he has over the years hinted at his own anti-nationalist views.

Speaking at a memorial marking the 70th anniversary of Japan's surrender, Akihito expressed "deep remorse" for the country's actions in World War II.

Some saw this as a rebuke to nationalist Prime Minister Shinzo Abe, who has pushed to change Japan's pacifist constitution and prevent Japanese from having to apologize again for the nation's warring past.