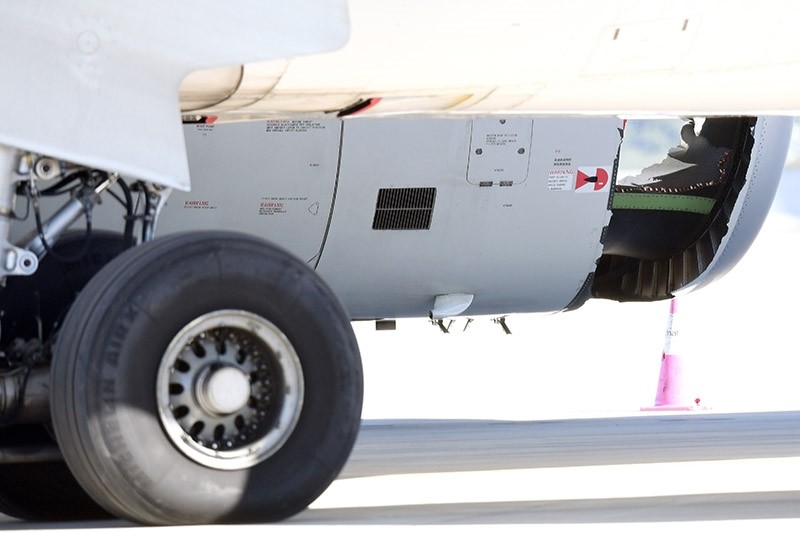 A view of the damaged engine on a China Eastern Airlines plane is seen at the international airport in Sydney, New South Wales, Australia, 12 June 2017 (EPA Photo)
by Compiled from Wire Services Jun 12, 2017 12:00 am

A China Eastern passenger plane has made an emergency landing in Sydney after a huge hole appeared in one of its engine casings and forced it to turn back just after taking off.

China Eastern Airlines said the crew on Flight 736 noticed damage to the air inlet on the left engine after takeoff Sunday evening and the captain decided to return.

The airline said on its Sina Weibo microblog that the plane landed safely and the airline was taking care of passengers' needs. The Airbus A330 plane has two engines.

Passengers told Australian media they heard a massive noise and smelled something burning.

Passenger Ashley Beck told Australia's Channel Nine television that after the passengers heard the loud noise, the crew started moving everyone from the left side of the plane.

Photos showed a jagged, vertical hole in the side of the casing.

AirlineRatings.com editor Geoffrey Thomas said investigators would be looking at whether the acoustic panelling of the engine had become detached, citing a similar incident in mid-May involving an Egypt Air A330.

He said the panel might have come back and been sucked into the engine.

Thomas said an Airbus airworthiness directive issued in 2011 and updated in 2014 noted that some operators had found acoustic panelling in the cowling area was disbonding.

"It was a problem that they knew about and airlines had been warned and had been required to inspect their engines and if necessary replace the panels," he added.

"Whoever is looking after the maintenance of the engines, whether it is the airline or the engine maker, it's their responsibility."

He said the China Eastern incident was unusual and the serious damage to the engine meant it was likely to be replaced.

But despite the dramatic scenes, Thomas said the damage was not as severe as the engine failure experienced by Qantas Singapore-Sydney flight QF32 in 2010 due to a separate problem, which led the Australian carrier to ground all its A380s.

The robustness of today's engines also meant twin-engine jets could continue taking off -- when they were under the most stress -- even if there was a failure of one of them, he said.

"Engines today are so reliable that in fact some twin-engine aeroplanes are certified to fly up to 330 minutes flying time away from an alternate airport," Thomas said.

China Eastern said all passengers would be placed on flights departing Australia Monday.