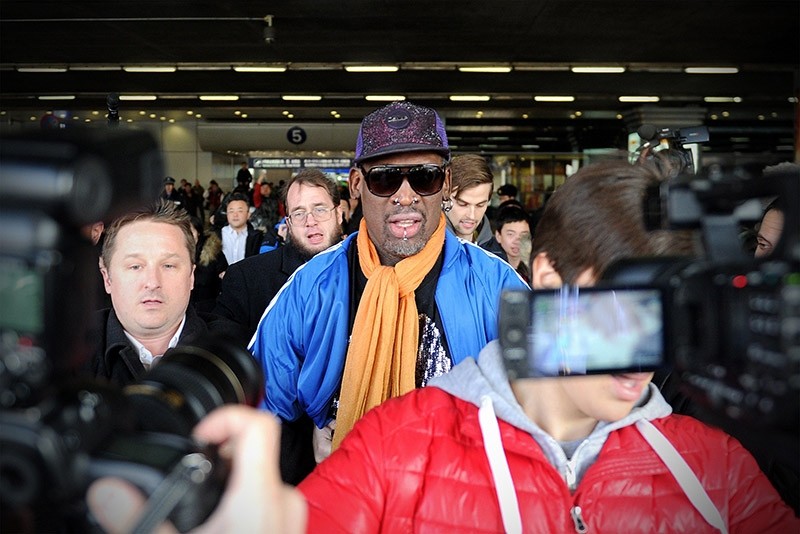 Former US basketball player Dennis Rodman (C) is surrounded by the media as he arrives at Beijing International Airport from North Korea on January 13, 2014 (AFP File Photo)
by Compiled from Wire Services Jun 13, 2017 12:00 am

Flamboyant former NBA star Dennis Rodman was headed for North Korea Tuesday, with the heavily-tattooed former player apparently set for another round of his controversial "basketball diplomacy".

Sporting a baseball cap, sunglasses, multiple facial piercings and a black t-shirt emblazoned with the logo of sponsor PotCoin -- a cryptocurrency for the legal cannabis industry -- Rodman posted a photo of himself on Twitter smiling and waving his ticket on the North's flag carrier Air Koryo.

"Headed back to North Korea," Rodman tweeted, thanking PotCoin for sponsoring his mission.

The flight carrying the 56-year-old left Beijing International Airport at 1 pm (0500 GMT) for Pyongyang, after the eccentric ex-Chicago Bulls power forward had caused a stir with a crowd of journalists pursuing him through the departures hall.

Rodman, who has made several trips to the country, sported a black T-shirt advertising a marijuana cybercurrency as he headed toward immigration at Beijing airport, from where he is expected to fly to Pyongyang, the North Korean capital.

Asked if he had spoken to Trump about his trip, he said, "Well, I'm pretty sure he's pretty much happy with the fact that I'm over here trying to accomplish something that we both need."

Rodman has received the red-carpet treatment on four past trips since 2013, but has been roundly criticized for visiting during a time of high tensions between the U.S. and North Korea over its weapons programs.

His entourage included Joseph Terwilliger, a professor who has accompanied Rodman on previous trips to North Korea.

Rodman said the issue of several Americans currently detained by North Korea is "not my purpose right now."

In Tokyo, a visiting senior U.S. official said Rodman's trip is as a private citizen.

"We are aware of his visit. We wish him well, but we have issued travel warnings to Americans and suggested they not travel to North Korea for their own safety," U.S. Undersecretary of State Thomas Shannon told reporters after discussing the North Korean missile threat and other issues with Japanese counterparts.

North Korea has been hailed by marijuana news outlets and British tabloids as a pothead paradise and maybe even the next Amsterdam of pot tourism. But the claim that marijuana is legal in North Korea is not true: The penal code lists it as a controlled substance in the same category as cocaine and heroin.

Americans have been sentenced to years in North Korean prisons for such seemingly minor offenses as stealing a political banner and likely could not expect leniency if the country's drug laws were violated.