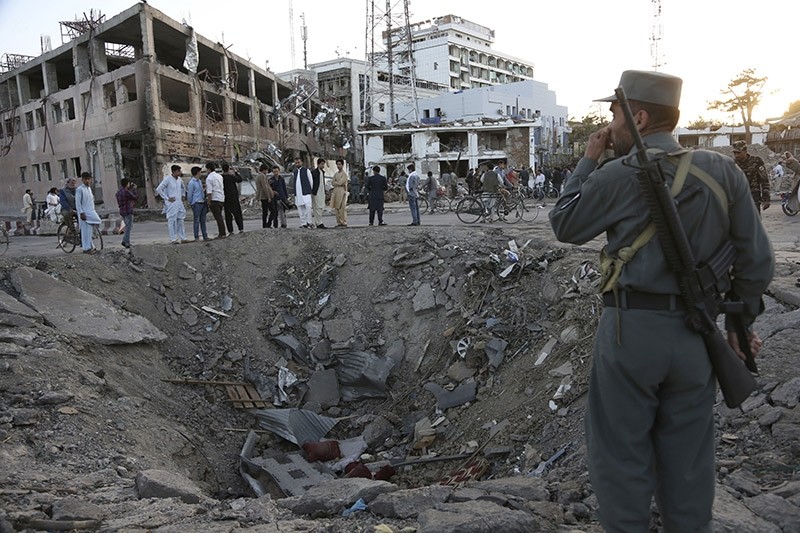 In this Wednesday, May 31, 2017 file photo, security forces stand next to a crater created by a massive explosion, that killed over 150 according to the Afghan president, in front of the German Embassy in Kabul, Afghanistan. (AP Photo)
by German Press Agency - DPA Jun 13, 2017 12:00 am

A suspected U.S. drone strike killed a commander of the Haqqani network in Pakistan, officials said Tuesday, weeks after a massive truck bombing in Kabul's diplomatic quarter that was blamed on the Taliban-affiliated group.

The drone fired two Hellfire missiles on a house used as hideout by Haqqani commander Abu Bakar in a semi-tribal region near the north-western Pakistani town of Hangu, a security official said.

No one else was hurt as Bakar was alone at the time of the dawn attack, said another police officer.

The rare drone strike in Pakistan comes nearly two weeks after more than 150 people were killed in the truck bombing in the Afghan capital.

Afghan intelligence blamed the Haqqani network, but the group denied involvement in a video on Monday.

It was not immediately known if the drone strike was linked to the Kabul bombing.

Pakistani Prime Minister Nawaz Sharif and Afghan President Ashraf Ghani met in the Kazakh capital of Astana last week and vowed to work closely against the "common enemy" of terrorism.

U.S. Defense Secretary James Mattis on Monday said the Pentagon's new plan for Afghanistan will include "a regional approach," hinting towards a focus on Pakistan.