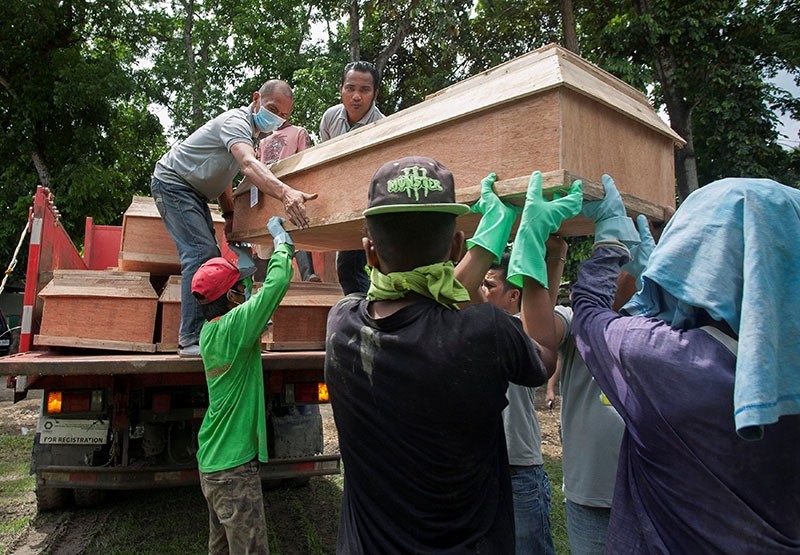 Funeral workers lift a coffin containing one of the civilians who was killed in a firefight between troops and insurgents from the Maute group during a mass burial ceremony at the cemetery in Iligan city, Philippines June 15, 2017. (Reuters Photo)
by Jun 15, 2017 12:00 am

A Philippines politician said on Thursday residents fleeing besieged Marawi City had seen at least 100 bodies in an area where intense fighting has taken place between security forces and Daesh terrorists in the last three weeks.

The government's crisis management committee spokesman, Zia Alonto Adiong, added that there are also an estimated 500 to 1,000 residents trapped in the area.

Marawi, the most important Muslim city in the mainly Catholic Philippines where government forces are struggling to defeat hundreds of militants fighting under the black flags of the Daesh group.

The military has said 290 people have died in more than three weeks of fighting, including 206 militants, 58 soldiers and 26 civilians.

The city of 200,000 people has been largely abandoned due to the fighting, which has seen the military relentlessly bomb the areas held by the militants, with residents fleeing to nearby towns.

Some of the civilians trapped in the militant-controlled areas are being used as human shields, according to the military.

Camalia Baunto keeps a desperate vigil for news of her husband, trapped just a short walk away in brutal fighting.

He is among hundreds of civilians pinned down in pockets of Marawi that are controlled by the militants, and they are facing an onslaught of deadly threats including bombs, sniper fire, hunger and a lack of medical care.

Some have made a two-kilometer (1.2-mile) sprint to safety during the three weeks of conflict, risking being shot at by the militants, and Camalia waits every day at a secured government building nearby hoping her husband will run into her arms.

"It's really painful for me. I'm always scared he'll be hit," Camalia, 43, told AFP on Wednesday in a soft voice as she held back tears and anxiously fixed her hijab.

"He is too traumatized to escape. Even we on the outside are afraid because you don't know which direction the bullets are coming from."

They have since withstood a relentless, US-backed bombing campaign and intense ground battles with Filipino troops that have left large parts of Marawi resembling devastated cities in war-torn Syria and Iraq.

One of the keys to their survival has been the trapped civilians, who are acting as human shields in stopping the military from completely destroying the small areas controlled by the gunmen.

Even so, entire streets are now just full of rubble and the military's bombs have not always hit their targets -- with one strike going astray and killing 10 soldiers.

Camalia's family was visiting a nearby town when the clashes began but her husband, Nixon, returned to check on their home and their hardware store.

Since then Nixon has been able to call her occasionally and report terrifying snippets of survival.

"He hasn't eaten. He hasn't slept. A bomb here, an explosion there. He is getting weak," she said at the provincial government office's entrance, from where she could see military helicopters bomb militant-controlled areas.

Twenty-six civilians have been confirmed killed in the fighting. But local officials and aid workers believe dozens more have likely died, with their corpses rotting in the militant-held areas, and that conditions are growing increasingly dire as food runs out.

"Some residents are eating (cardboard) boxes. They just dip it in water to soften the material and eat it," provincial crisis management committee spokesman Adiong told AFP, recounting testimonies from people who escaped.

"It's heartbreaking. It's almost unbelievable to think that people are living this way."

The military has also reported that the militants are using some civilians as slaves, making them cook and carry munitions.

One survivor who escaped on Tuesday, Christian housepainter Nick Andeleg, 26, said he and his colleagues decided to flee after coming to the realization that waiting any longer would certainly lead to death.

"We thought we were the only ones left trapped. We felt it was better to try escaping. If we died outside our house, at least we tried to save ourselves," Andeleg told AFP as he recounted watching bombs destroy houses around him.

"We hid anywhere we could. We'd go under all kinds of furniture: beds, cabinets, in the toilet. We were like rats hiding under anything we could find."

Camalia Baunto, who has left her six children with her in-laws outside of Marawi, said she was determined to wait for her husband.

She appeared tormented by the wait though, mumbling to herself while sitting alone sometimes, and asking unanswerable questions to others at the government building.

"When is this crisis going to end? When will this chaos be over?"

Duterte takes the week off while clashes continue

Despite the crisis in Marawi, Philippine President Rodrigo Duterte has withdrawn from public duties this week because he is tired and needs to "rejuvenate", his spokesman said Thursday during the biggest crisis of his rule.

Duterte, 72, has not been seen in public since Sunday and missed a scheduled appearance the following day at annual Independence Day celebrations in Manila, sparking speculation about the state of his health.

Abella said there was no date for when Duterte would resume his official duties, although he insisted the president was healthy. "I'm saying that there's nothing to worry about in terms of sickness," he said.

Pressed by journalists to state whether Duterte had visited a doctor this week, Abella said: "I'm not privy to those matters but I'm sure he's checked with his own experts."

Duterte was last seen in the southern city of Cagayan de Oro, visiting soldiers wounded in nearby fighting with Daesh-styled gunmen that is now on its fourth week.

Duterte imposed martial law over Marawi and the rest of the southern region of Mindanao, home to 20 million people, on the day the fighting erupted to head off what he said was an attempt by Daesh to carve out its own territory there.

Abella said Duterte was taking time off because of a punishing schedule since then, which included regular visits to military camps and hospitals to support troops.

"It has been really brutal, so it is important to allow him this kind of rest," Abella said.

Duterte had repeatedly denied during last year's presidential election campaign that he suffered from cancer.

However he said last December that he used to take fentanyl, a highly addictive synthetic opioid, to ease the pain of a spinal injury that he suffered in motorcycle accidents many year earlier.

Duterte said then his doctor made him stop using it on learning he was "abusing the drug" by using more than the prescribed amount.

Duterte's fentanyl comments attracted controversy as he has led a war on drugs in which thousands of addicts and users have been killed.

Under the constitution, the separately elected vice president shall act as president if the incumbent dies, is permanently disabled or removed from office.

One of Duterte's aides later released photos which he said were taken on Thursday evening, showing the president standing up and looking healthy.

Australian journalist shot in the neck in war-torn Marawi

An Australian television journalist was shot in the neck on Thursday as he reported from Marawi, but he did not suffer major injuries.

Adam Harvey, a reporter for the Australian Broadcasting Corporation, wrote on Twitter: "Lucky", alongside an image of an X-ray showing the bullet lodged in his neck, close to his spine.

Thanks everyone - I'm okay. Bullet is still in my neck, but it missed everything important. pic.twitter.com/PBYfdrTTa6


He was inside the provincial capitol compound where local and foreign journalists have congregated during the more than three weeks of fighting, Adiong told AFP.

Although the compound is secured by the military, it is only about two kilometers (1.2 miles) from the pockets of the city that the gunmen control.

"I want to appeal to everyone you should be very careful because in our assessment the vicinity of the 103rd (military camp), the vicinity of the capitol is within the line of sight of the enemy," local military spokesman Lieutenant-Colonel Jo-ar Herrera told reporters in the compound after the shooting incident.

Harvey was taken to the nearby city of Iligan for medical treatment, Adiong said.