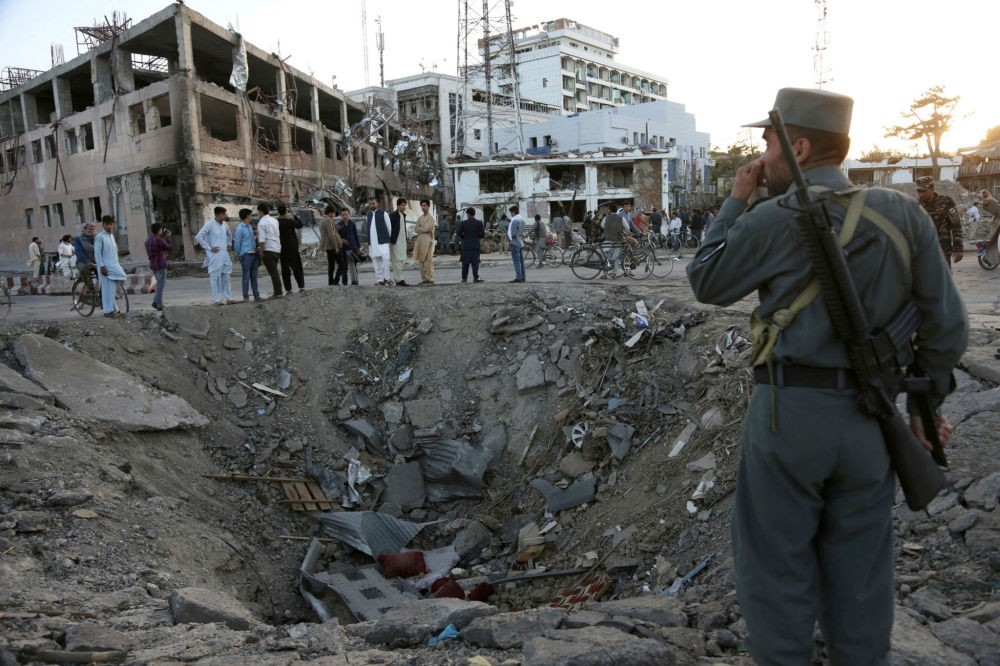 Security forces stand next to a crater created by a massive explosion, that killed over 150 in front of the German Embassy in Kabul, Afghanistan on May 31.
by Compiled from Wire Services Jun 16, 2017 12:00 am

As the emergence of the local Daesh branch has made Afghanistan even more volatile, the group claimed it have captured Osama bin Laden's infamous Tora Bora mountain hideout, the Taliban dismissed the claims

Pressed by Afghan and U.S. forces, Daesh militants have seized a new stronghold in Tora Bora, a mountainous area dotted with caves along Afghanistan's border with Pakistan, officials said yesterday.

The Tora Bora mountains hide a warren of caves in which al-Qaida militants led by bin Laden hid from U.S. coalition forces in 2001, after the Taliban fled Kabul and before he fled to neighboring Pakistan.

Afghan officials said Daesh militants have seized cave complexes in Tora Bora, after days of fighting against Taliban who had been based there.

"Those areas around Tora Bora were a Taliban stronghold, but now Daesh militants captured them during fighting," the police commander in the area, Shah Wali, told Reuters news agency.

Taliban spokesman Zabihullah Mujahid acknowledged that Islamic State forces had managed to capture several villages, but he denied that they had seized Tora Bora.

According to testimony from al-Qaida captives in the U.S. prison at Guantamo Bay, Cuba, bin Laden fled from Tora Bora first to Afghanistan's northeastern Kunar province, before crossing the border into Pakistan. He was killed in a 2011 raid by U.S. Navy SEALs on his hideout in the Pakistani garrison town of Abbottabad.

Pakistan complained the raid violated its sovereignty while bin Laden's presence — barely a few miles from the Pakistani equivalent of America's West Point military academy — reinforced allegations by those who accused Pakistan of harboring the Taliban and al-Qaeda militants. Pakistan denies such charges, pointing to senior al-Qaida operatives it has turned over to the United States.

The emergence of the local Daesh branch has made Afghanistan even more volatile. The affiliate, known as Daesh in Khorasan, an ancient name for parts of Afghanistan, Iran and Central Asia, has taken credit for several brazen assaults on Kabul including the attack on a military hospital on March 8 when Daesh gunmen, wearing white lab coats, stormed a military hospital in Kabul, killing 50 people. It has pledged allegiance to the Daesh group in Iraq and Syria but consists mainly of disgruntled former Taliban and other insurgents from South and Central Asia. Afghanistan was shaken by worst attack as the huge blast kills at least 80 in Kabul diplomatic quarter, leaving large parts of the Turkish and German embassy damaged on May 31.

General John Nicholson, the top U.S. commander in Afghanistan, has vowed to defeat Daesh there this year, and in April used one of the largest conventional bombs ever dropped in combat to target a cave complex used by Daesh in the nearby district of Achin.

More than 16 years after the U.S. invaded Afghanistan to end Taliban rule and flush out al-Qaida, the mountainous regions along the Afghan-Pakistani border are still home to an array of militant groups. Pakistan's spy service is said to have connections to some, including the Afghan Taliban, even as it battles other groups that threaten its own citizens.