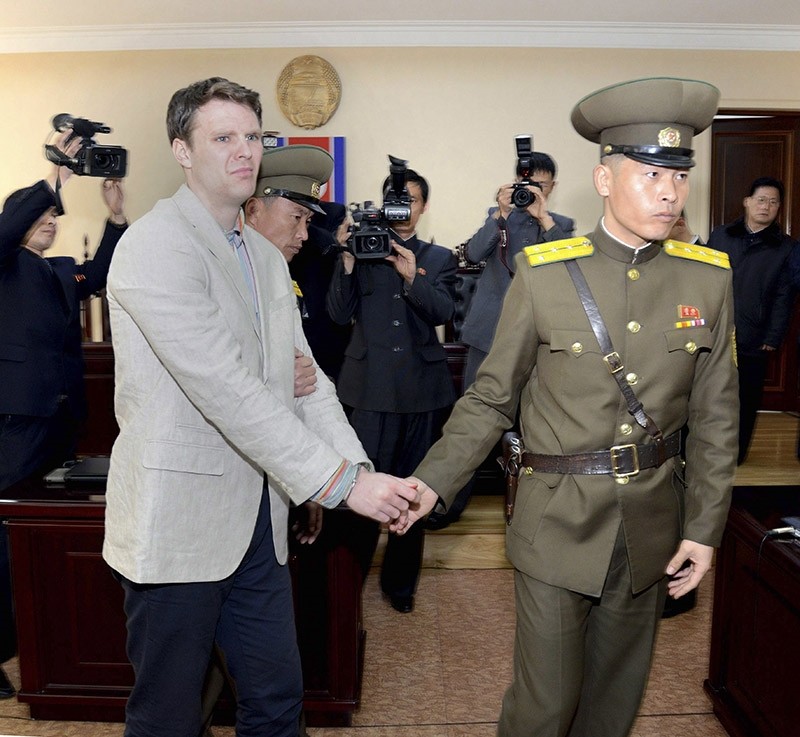 The Chinese tour agency that organized U.S. student Otto Warmbier's trip to North Korea during which he was arrested, sentenced to hard labor and sustained injuries that led to his death said Tuesday it would stop taking U.S. citizens on tours to Pyongyang.

Young Pioneer Tours, which is based in the Chinese city of Xi'an, said in a Facebook post that the "risk for Americans visiting North Korea has become too high."

The agency organized the trip early last year during which Warmbier, then 21, was arrested for allegedly trying to steal a propaganda banner from his hotel.

Warmbier was charged with hostile acts against the state and sentenced to 15 years hard labor last March. He was medically evacuated to the U.S. last week in a coma and died on Monday.

The tour agency, which specializes in tours to North Korea and other destinations perceived as dangerous, said that "despite constant requests," it was "denied any opportunity to meet him or anyone in contact with him in Pyongyang, only receiving assurances that he was fine." The way Warmbier's detention was handled was "appalling," the company said.

Tourists wanting to travel to the North must go with a tour company. Americans are required to fly to Pyongyang from Beijing, while other nationalities are allowed to go by train. But the U.S. State Department strongly warns Americans against traveling there.

Adam Pitt, a Briton who traveled with Young Pioneer Tours to North Korea in 2013, told AFP he was given "very little warning" about the potential risks of going to the North.

"It became apparent very early on in the trip that the culture was very much what you'd expect to find on a binge-drinking destination in the Mediterranean," said Pitt, highlighting "lewd jokes" and "all-night drinking" by members of his group.

But the company, which promises to take adventurous travelers to destinations such as Chernobyl and Iran for "as cheap as possible", has a five-star rating on TripAdvisor and several posts on Facebook praised it.

Emails and calls to Young Pioneer Tours' office in the central city of Xian and mobile numbers went unanswered.

The North claimed Warmbier fell into a coma soon after he was sentenced last year.

Medical tests carried out in the United States dispute North Korea's claim that he had contracted botulism but the cause of his brain injury remain unclear.

Three more US citizens are currently being held by the North. Two were teachers at a Pyongyang university funded by overseas Christian groups, and the third is a Korean-American pastor who was accused of espionage for the South.