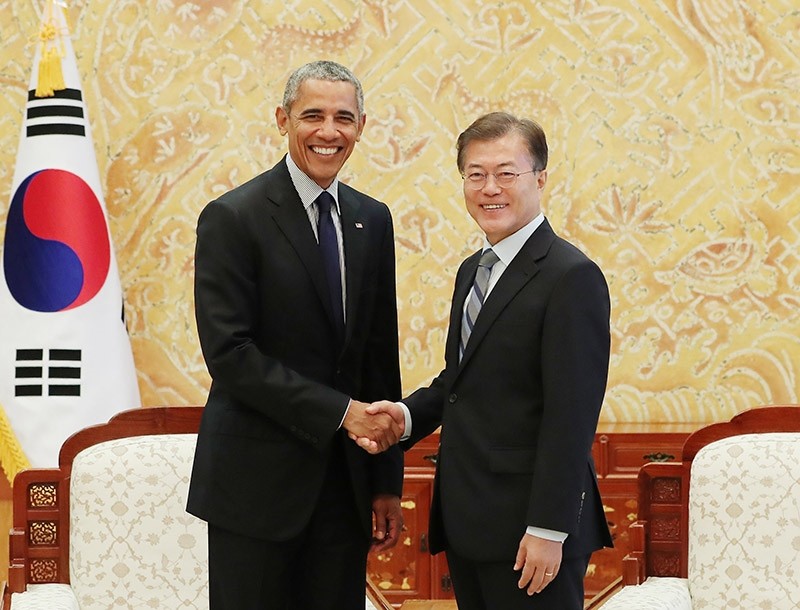 North Korea has a last chance to engage in dialogue with the outside world, South Korean President Moon Jae-in said on Monday during a meeting with former U.S. president Barack Obama, Moon's office said.

Obama is visiting Seoul this week to speak at a forum hosted by South Korea's Chosun Ilbo newspaper, where, earlier on Monday, he said North Korea's pursuit of nuclear weapons had "done nothing to secure the North Korean people".

"President Moon said he talked to President Trump about using sanctions and pressure to resolve the North Korean missile and nuclear problem, but also to use dialogue at the same time," Yoon said.

"He said it is the last opportunity for North Korea to enter the door of dialogue."

North Korea has been relentlessly developing its nuclear weapons and missiles to carry them since the beginning of last year, ignoring the threat of yet more U.N. sanctions and U.S. military maneuvering.

North Korea says it aims to develop a nuclear-tipped missile capable of striking the U.S. mainland in order to defend itself from what it sees as U.S. aggression aimed at overthrowing its government.

Trump called for a determined response to North Korea in his talks with Moon on Friday. Trump stressed the importance of the U.S.-South Korean alliance but took aim at Seoul over trade and sharing the cost of defense.

Obama told the forum the world must send a clear message to North Korea, that security and prosperity will not come from the pursuit of weapons, according to a copy of his speech, issued by Chosun Ilbo.

"The international order depends upon the enforcement of clear rules and norms. So long as North Korea chooses to remain outside of that order, they must face the consequences."

Other scheduled speakers at the conference, hosted by a South Korean newspaper, include former British Prime Minister David Cameron as well as former prime ministers of Finland, Italy and Japan.

On Saturday, Obama delivered his first post-presidential speech in Asia, emphasizing tolerance, democracy and youth empowerment at a congress of the Indonesian Diaspora in Jakarta, a day after meeting with Indonesian President Joko Widodo.