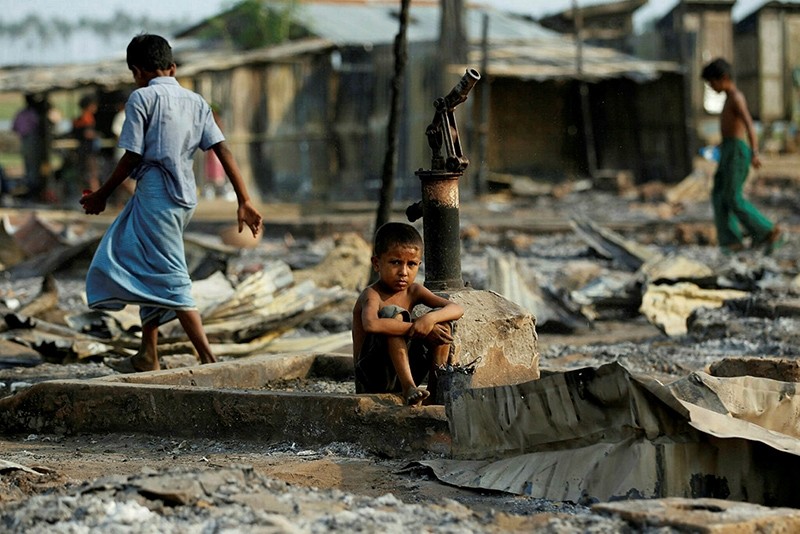 A mob in Myanmar's western Rakhine State killed a member of the Muslim Rohingya ethnic minority and injured six others who were on a police-guarded trip Tuesday from the displacement camp where they live to the city that many Rohingya were forced to flee five years ago.

The seven were given a ride by police to the dock area of Sittwe, the Rakhine capital, to purchase some boats. The Rohingya are normally confined to the camp, and police provide rides in a closed truck to both restrict and protect them.

A police officer and one of the men said the group was attacked by about 100 members of the Buddhist Rakhine ethnic group, whose violent assaults in 2012 drove most Rohingya residents from their Sittwe homes.

Communal tensions have not eased much since the 2012 violence, which killed hundreds and drove about 140,000 people — predominantly Rohingya — to camps for the internally displaced, where most remain. The Rohingya face severe discrimination in Buddhist-majority Myanmar, where they are widely regarded as illegal immigrants from Bangladesh stealing Myanmar land, although many have been settled in the country for generations.

Violence in recent years has been more widespread in northern Rakhine, where there is a bigger Rohingya population but spread across unguarded villages. Last October, the army launched counterinsurgency operations there after the killing of nine border guards. U.N. human rights investigators and independent rights organizations charge that soldiers and police killed and raped civilians and burned down more than 1,000 homes during the operations.

The camps near Sittwe are generally safer from attack but with unhealthy conditions and little chance to make a living. The Dar Paing camp from which Tuesday's victims came houses about 8,000 people. A small group of Rohingya remain in Sittwe in a closed-off ghetto.

"As one of the Kalars got off from the truck and was talking to another guy, some of the Rakhine Buddhists started shouting 'the Kalars are entering the city' and attracted the mob," police officer Phyo Wai Kyaw told The Associated Press. "Kalar" is a widely used derogatory term referring to Rohingya.

"The Rakhine started beating the Muslims up. One of the Kalars died on the spot and six were taken right away to the hospital. The two police guarding the Muslim guys couldn't do anything as it was a big mob. The mob even followed the injured guys to the Sittwe hospital. The hospital gate needed to be shut because of the big mob."

Abdu Alam, 65, one of the injured men, was hit in the head by a brick. His account of the attack was similar to the police officer's.

He said that when one of the seven people in the police truck got out to talk with the boat seller, some Rakhine men saw him and started shouting, drawing others to attack them.

"They started stoning us. Some guys grabbed wooded sticks to beat us. Things happened so fast that we were stuck in the vehicle and the mob started attacking us," said Abdu Alam, who was able to return to his camp later from the hospital.

"The policemen tried to stop them but there were too many of them and it was impossible to stop them. Finally we all got injured and taken to the hospital by the police."