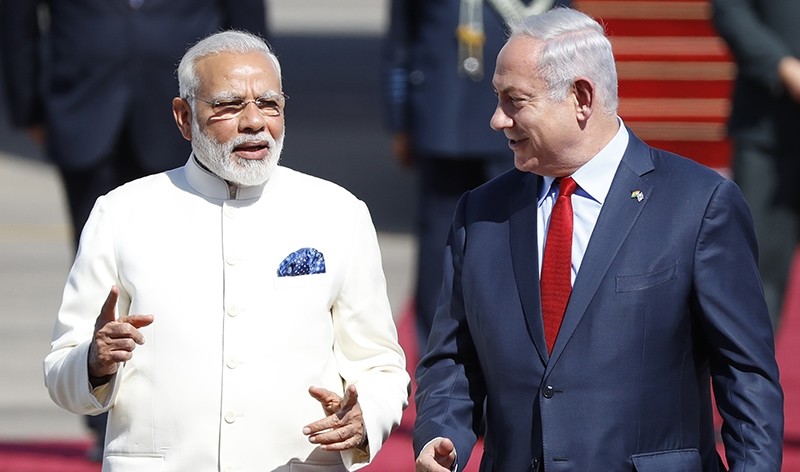 India's prime minister, Narendra Modi, on Tuesday kicked off a high-profile visit to Israel aimed at celebrating 25 years of diplomatic relations and strengthening his country's already warm ties with the Jewish state.

Prime Minister Benjamin Netanyahu greeted Modi at Israel's international airport near Tel Aviv and will accompany the Indian leader throughout the three-day visit. Israeli officials said the warm treatment goes well beyond diplomatic protocol and reflected the importance of the visit.

Modi, who will not be meeting Palestinian officials while he is in town, was welcomed with an honor guard and warmly hugged Netanyahu as he descended from the aircraft.

"We receive you with open arms. We love India. We admire your culture, we admire your history, your democracy, your commitment to progress," Netanyahu said. "We view you as kindred spirits in our common quest to provide a better future for our peoples and for our world."

Modi said it was a "singular honor" to be the first sitting prime minister of India to visit Israel.

"Alongside building a partnership for shared economic prosperity, we are also cooperating to secure our societies against common threats such as terrorism," he said. "A progressive partnership in all these areas will shape the scope of my conversation with prime minister, my friend, Netanyahu."

During the Cold War, India was a leading member of the Nonaligned Movement of developing countries and sided staunchly with the Palestinians in their conflict with Israel. Before ties were established in 1992, India would not even allow its citizens to enter Israel on an Indian passport.

But over the past quarter century, the two countries have cultivated warm ties, particularly in the areas of technology and defense cooperation.

India is a major purchaser of Israeli arms. This year, Israel's state-owned Israel Aerospace Industries has announced over $2 billion in contracts to provide air and missile-defense systems to India.

Rafael, another state-owned defense contractor, is trying to finalize a deal to sell 8,000 "Spike" anti-tank missiles to India in a deal that is reportedly valued at some $1 billion, according to an industry expert familiar with the deal. He spoke on condition of anonymity because he was not authorized to talk to the media.

Netanyahu will join Modi at virtually every stop of a packed schedule that includes working meetings, a trip to Israel's Yad Vashem Holocaust memorial, meetings with high-tech executives, a stop at a cemetery for Indian soldiers killed during World War I, a cultural event with Indian Jews, and observing an Israeli desalination machine.

Yuval Rotem, the director general of Israel's Foreign Ministry, said the decision for Netanyahu to spend so much time with Modi is not a standard practice for visiting dignitaries and indicated "the highest level of importance" attached to the visit.

Mark Sofer, the ministry's deputy director for Asia and the Pacific, said the meetings would focus on various areas of technology, including cybersecurity and space research, with a particular focus on Israeli water and agricultural technologies. He said a joint statement is to come on Wednesday.

At the airport ceremony, Netanyahu announced the establishment of a $40 million innovation fund to promote technological cooperation.

Modi is also set to visit an Israeli boy whose parents were killed in a massacre by terrorists in Mumbai in 2008, along with the Indian nanny who rescued him. The boy, who is now 10, returned to Israel with the nanny after the attack, and the woman still lives in the country.

In a departure from standard protocol, Modi will not be visiting the Palestinians, though all sides have tried to play down the decision.

Palestinian President Mahmoud Abbas visited Modi in India in May, and Indian officials say they handled all their business at the time.

Palestinian officials likewise say that Abbas' meeting in May was a sign of strong relations, and that India remains a close ally. Abbas, in any case, is out of the country for the next week. The officials spoke on condition of anonymity because they were discussing a diplomatic matter.