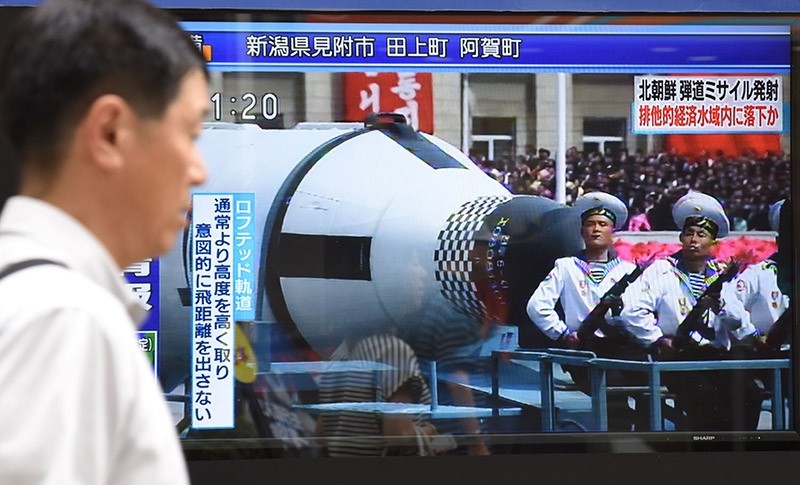 A pedestrian walks past a screen in Tokyo on July 4, 2017 broadcasting file news footage of a military parade showing North Korean soldiers and a missile, after a ballistic missile was launched by North Korea earlier in the day. (AFP Photo)
by Jul 04, 2017 12:00 am

North Korea launched what appeared to be its longest-range ballistic missile yet on Tuesday, with experts suggesting it could reach Alaska, triggering a Twitter outburst from U.S. President Donald Trump who urged China to "end this nonsense once and for all".

If the test -- which came as the United States prepared to mark its independence day on the Fourth of July -- represents an intercontinental ballistic missile (ICBM) it would force a recalculation of the strategic threat posed by Pyongyang.

The North has long had ambitions to build a rocket capable of delivering an atomic warhead to the continental United States - something that Trump has vowed "won't happen".

It said it would make an "important announcement" later Tuesday, the South's Yonhap news agency reported.

Analysts say the isolated, impoverished country has made great progress in its missile capabilities in the years since the ascension to power of young leader Kim Jong-Un, who has overseen three nuclear tests and multiple rocket launches.

In response to the latest, Trump asked on Twitter: "Does this guy have anything better to do with his life?"

There are still doubts whether the North can miniaturize a nuclear weapon sufficiently to fit it onto a missile nose cone, or has mastered the technology needed for it to survive re-entry into the Earth's atmosphere.

But Tuesday's launch was the latest in a series of provocations that have ratcheted up tensions, and came days after Seoul's new leader Moon Jae-In and Trump focused on risks from Pyongyang in their first summit.

The United Nations has imposed multiple sets of sanctions on Pyongyang over its weapons programs, which retorts that it needs nuclear arms to defend itself against the threat of invasion.

The "unidentified ballistic missile" was fired from a site in North Phyongan province, the South's Joint Chiefs of Staff said in a statement, and came down in the East Sea, the Korean name for the Sea of Japan.

It flew for "more than 930 kilometers", they added.

U.S. Pacific Command confirmed the test and said it was a land-based, intermediate range missile that flew for 37 minutes, adding the launch did not pose a threat to North America.

It was estimated to have reached an altitude of more than 2,500 kilometers, Japan said.

"That's it. It's an ICBM," responded arms control specialist Jeffrey Lewis on Twitter. "An ICBM that can hit Anchorage not San Francisco, but still."

David Wright, of the Union of Concerned Scientists, wrote on the organizations' allthingsnuclear blog that the available figures implied the missile "could reach a maximum range of roughly 6,700 km on a standard trajectory".

"That range would not be enough to reach the lower 48 states or the large islands of Hawaii, but would allow it to reach all of Alaska."

Meanwhile, Russian Ministry of Defense said that the missile launched by North Korea was intermediate range, and not an ICBM.

"The missile ascended to an altitude of 535 km and flew about 510 km, falling in the central part of the Sea of Japan. The parametric flight data of the ballistic target corresponds to tactical and technical characteristics of a medium-range ballistic missile," Russian defense ministry said, adding that it did not pose a threat to the Russian Federation

The device came down in the Sea of Japan within the country's exclusive economic zone, the defense ministry said in a statement, waters extending 200 nautical miles from its coast.

The U.S., Japan and South Korea will hold a summit on the sidelines of this week's G20 meeting on the issue, he added. "Also I will encourage President Xi Jinping and President Putin to take more constructive measures."

South Korea's President Moon, who backs both engagement with the North to bring it to the negotiating table and sanctions, strongly condemned what he called an "irresponsible provocation".

North Korea's nuclear and missile programs "threaten the lives of our people and the security of our allies", he told a meeting of the South's National Security Council.

Washington, South Korea's security guarantor, has more than 28,000 troops in the country to defend it from its Communist neighbor, and fears of conflict reached a peak earlier this year as the Trump administration suggested military action was an option under consideration.

There has also been anger in the United States after Otto Warmbier, an American student detained in North Korea on a tourist trip around 18 months ago, was returned home in a coma in June, dying days later.

Trump has been pinning his hopes on China -- North Korea's main diplomatic ally -- to bring pressure to bear on Pyongyang.

Last week he declared that Beijing's efforts had failed, but returned to the idea on Twitter following the launch: "Perhaps China will put a heavy move on North Korea and end this nonsense once and for all!"

But a former foreign policy adviser to Hillary Clinton warned that his comments risked undermining the credibility of both the U.S. deterrent, and its assurances to its allies in Seoul and Tokyo.

She added: "Picking a twitter fight with a nuclear-armed dictator is not wise - this is not reality TV anymore."

Trump and China's Xi struck a friendly tone when they met at the U.S. leader's Florida resort in Florida in April, but he infuriated Beijing last week by approving a $1.3 billion arms sales to self-governing Taiwan.

The U.S. administration also imposed sanctions on a Chinese bank accused of laundering North Korean cash, voiced concern about freedom in semi-autonomous Hong Kong and placed the country on a list of the world's worst human trafficking offenders.

Shea Cotton, a researcher at the James Martin Center for Nonproliferation Studies in the U.S., suggested the North Korean launch was deliberately timed to coincide with the anniversary of the U.S. declaration of independence.

"It's already 4th of July in North Korea," he said on Twitter. "I somewhat suspect they're shooting off some fireworks today specifically because of that."