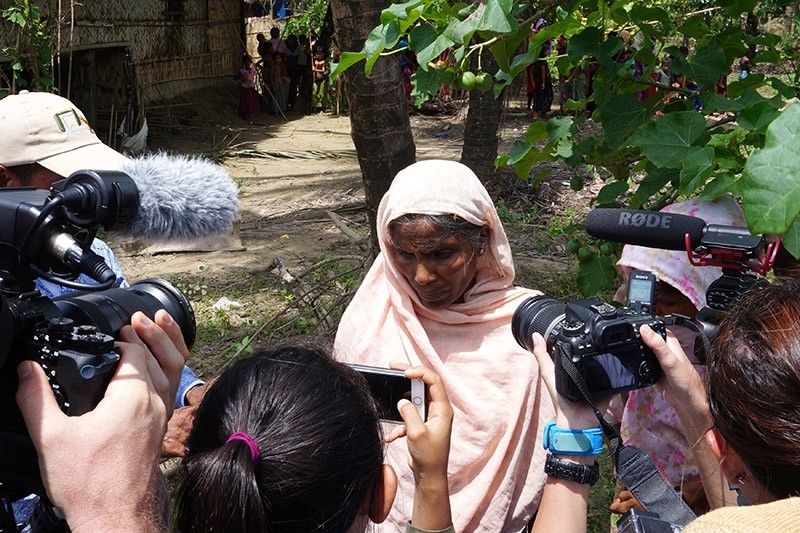 Rohingya Muslim women lined up to tell reporters of missing husbands, mothers and sons on Saturday, as international media were escorted for the first time to a village in Myanmar's northern Rakhine state affected by violence since October.

"My son is not a terrorist. He was arrested while doing farm work," said one young mother, Sarbeda. She had bustled her way, an infant in her arms, through several other women telling reporters their husbands had been arrested on false grounds.

In November, Myanmar's army swept through villages where stateless Rohingya Muslims live in the area of Maungdaw.

Some 75,000 people fled across the nearby border to Bangladesh, according to the United Nations.

U.N. investigators who interviewed refugees said allegations of gang rape, torture, arson and killings by security forces in the operation were likely crimes against humanity.

Myanmar's government, led by Nobel laureate Aung San Suu Kyi, has denied most of the claims, and is blocking entry to a U.N. fact-finding mission tasked with looking into the allegations.

The government has also kept independent journalists and human rights monitors out of the area for the past nine months.

This week, the Ministry of Information escorted more than a dozen foreign and local journalists representing international media to the area under a guard of officers from the paramilitary Border Guard Police.

The reporters spent nearly two days in Buthidaung, a township in Maungdaw district of Rakhine state, where they were taken to sites of alleged militant activity.

They were taken to Kyar Gaung Taung, one of three settlements requested by the journalists. Officials cited time constraints for the limited access.

Reuters had previously gathered accounts from residents by phone and from former residents who have fled to Bangladesh, of brutal counterinsurgency tactics unleashed in Kyar Gaung Taung and several nearby villages in mid-November.

When a group of journalists insisted on speaking to villagers away from security forces, allegations of abuses by troops emerged almost immediately.

Kyar Gaung Taung resident Sarbeda, 30, had been able to visit her son, Nawsee Mullah, 14, at a police camp where he is being held separately from adult detainees. She was not sure if he had a lawyer, she said.

Reuters reported in March that 13 boys under the age of 18 were detained during security operations. They were included in a list of 423 people charged under the colonial-era Unlawful Associations Act, which outlaws joining or aiding rebel groups.

At least 32 people from Kyar Gaung Taung village had been arrested and 10 killed, said a village schoolteacher, who asked not to be named for fear of reprisals. He estimated that half the village's 6,000 residents had fled during the clearance operation.

Another villager, Lalmuti, 23, pointed to a small pile of ashes where she said she found her father's remains. She described how he was bound and thrown into a house and burned to death.

Her mother was later arrested when authorities deemed her complaint about the killings to be fabricated. She is serving a six-month jail sentence, Lalmuti and two other villagers said.

Reporters were not given a chance to put these allegations to authorities, and Reuters was unable to reach officials to confirm the details of the cases by phone.

In a press briefing on Friday, Brigadier General Thura San Lwin, commander of Myanmar's Border Guard Police, said some villagers had made what he said were erroneous claims and were subsequently charged and jailed for lying to the authorities.

"The media said we torched houses and that there were rape cases -- they give wrong information," Thura San Lwin told reporters.

He also disputed the U.N.'s estimates for the number of people who fled, claiming local records showed that only 22,000 people were missing in the conflict.

Myanmar officials say a domestic investigation, led by Vice President Myint Swe - a former lieutenant general in the army - and a commission headed for former U.N. chief Kofi Annan - which is not mandated to investigate human rights abuses - are the appropriate ways to address problems in Rakhine State.