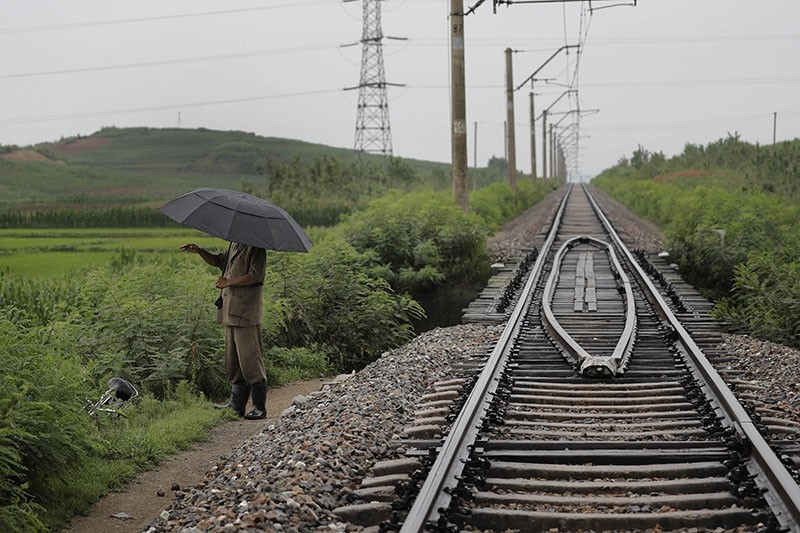 In this Friday, July 21, 2017, photo, a man stands near the pathway leading to where an unexploded bomb was found near the railway which runs through Hamhung from Pyongyang to the northeastern port of Chongjin. (AP Photo)
by Associated Press Jul 24, 2017 12:00 am

In the 10 years he has been digging up ordnance from the Korean War, Maj. Jong Il Hyon has lost five colleagues to explosions. He carries a lighter one gave him before he died. He also bears a scar on his left cheek from a bomb disposal mission gone wrong.

Sixty-four years after it ended, the war is still giving up thousands of bombs, mortars and pieces of live ammunition. Virtually all of it is American, but Jong noted that more than a dozen other countries fought on the U.S. side, and every now and then their bombs will turn up as well. 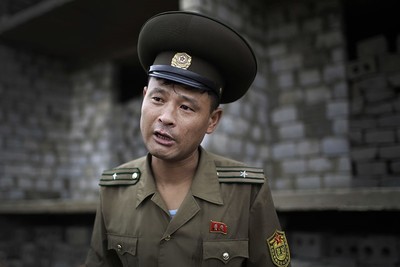 "The experts say it will take 100 years to clean up all of the unexploded ordnance, but I think it will take much longer," Jong said in an interview with The Associated Press at a construction site on the outskirts of Hamhung, North Korea's second-largest city, where workers unearthed a rusted but still potentially deadly mortar round in February. Last October, 370 more were found in a nearby elementary school playground.

According to Jong, his bomb squad is one of nine in North Korea, one for each province. His unit alone handled 2,900 leftover explosives — including bombs, mortars and live artillery shells — last year. He said this year they have already disposed of about 1,200.

Fortunately, there have been only a few injuries in the past few years. But Jong said an 11-year-old boy who found a bomb in May lost several fingers when it went off while he was playing with it. 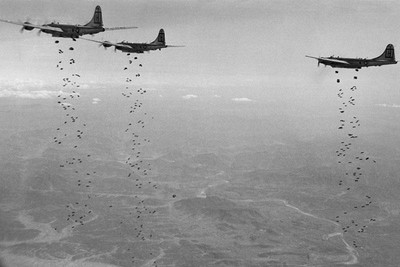 North Korea is just one of many countries still dealing with the explosive legacy of major wars. In Asia alone, Vietnam, Cambodia, Laos and even Japan have huge amounts of unexploded ordnance left to clean up.

The three-year Korean War, which ended in what was supposed to be a temporary armistice on July 27, 1953, was one of the most brutal ever fought.

Virtually all of the 22 major cities in North Korea were severely damaged and hundreds of thousands of civilians killed by U.S. saturation bombing. The tonnage of bombs dropped on the North was about the same as the total dropped by the U.S. against Japan during World War II. North Korea is probably second only to Cambodia as the most heavily bombed country in history.

By 1952, the bombing was so complete that the U.S. Air Force had effectively run out of worthwhile targets.

North Koreans claim 400,000 bombs were dropped on Pyongyang alone, roughly one bomb for every resident at the time, and that only two modern buildings in the capital were left standing. All told, the U.S. dropped 635,000 tons of bombs on Korea during the war, most of it in the North, including with 32,500 tons of napalm.

Twelve to 15 percent of the North's population was killed in the war.

Charles Armstrong, a historian at Columbia University, said the expansion of saturation bombing in North Korea marked something of a turning point for the United States and was followed by the use of an even heavier version during the Vietnam War.

"To this day, the North Korean government and media point to the American bombing as a war crime and a major justification for the continued mobilization of the North Korean people — as well as the development of nuclear weapons — in defense against future attacks," he said. 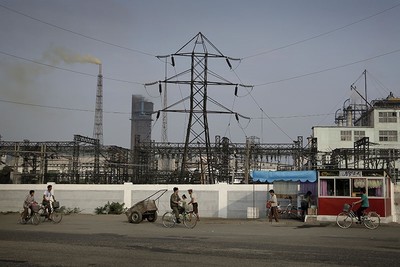 Armstrong noted that the Hamhung area and the nearby port of Hungnam were hit particularly hard by U.S. bombers because they were an industrial center and home to the largest nitrogen fertilizer plant in Asia.

Nitrogen fertilizer can be used to make explosives, so the U.S. Air Force obliterated the area in late December 1950. Later rebuilt, the fertilizer plant is still functioning today and remains one of Hamhung's most famous landmarks.

The bomb squads respond to calls when ordnance is discovered, check construction sites before excavation work begins and educate people, especially school children, about the dangers. Jong's squad, which covers South Hamgyong province, has nine members. The largest, in Kangwon along the South Korean border, has 15.

One bomb was uncovered in March by farmers digging an irrigation canal near a railway that runs through Hamhung from Pyongyang to the northeastern port of Chongjin.

"This railway was here during the war, so it was a target," said Yom Hak Chol, manager of the 4th work team of the Pohang cooperative farm. He was working in the field when the bomb was found and watched the bomb squad remove it.

"We had to evacuate the area. The bomb squad blew it up over there," he said, pointing to a narrow canal area where cows stood grazing between sprawling corn fields. "It left a hole 3 meters (10 feet) deep."

Some bombs are not easily recognizable to the untrained eye. Jong said he has come across a surprising variety of bombs and explained in detail one in particular — a "butterfly bomb" that used wing-like attachments to disperse small "bomblets" over a wider area. The bomb was originally devised by the Nazis during World War II. The U.S. revised its design and used them in North Korea.

Jong said many aging bombs have become even more dangerous as rust erodes their detonators, and that some could go off with the slightest movement.

"I'm sure that my daughter's generation will also suffer from this problem," he said. "I want the world to know that."

The rare access to Jong and the two sites on the outskirts of Hamhung was granted after repeated requests from the AP.

North Korea's state media have also reported on the issue as part of a month-long anti-U.S. propaganda campaign conducted in the run up to the anniversary of the end of the war.

The U.S. sent two B-1 strategic bombers on a training mission in the skies near the Demilitarized Zone after North Korea's July 4 test of its first intercontinental ballistic missile. Such demonstrations of power are especially sensitive considering the historical legacy of the Korean War.