29 people killed in explosion inside Shiite Muslim mosque in Afghanistan 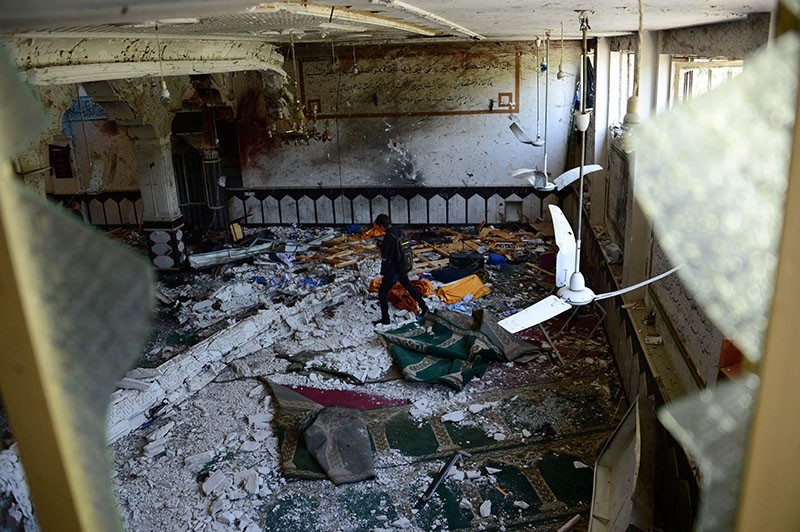 An Afghan media personnel walks through a Shiite mosque after it was attacked by suicide bombers in Herat on Aug. 2, 2017. (AFP Photo)
by Compiled from Wire Services Aug 01, 2017 12:00 am

Farhad said the death toll was expected to rise past 30 because at least 10 of the wounded were in a critical condition.

However Mehdi Hadid, a lawmaker from Herat, who went to the site soon after the explosion told The Associated Press that the scene was one of horrific carnage. He estimated at least 100 dead and wounded were scattered throughout the mosque. The attack took place in the middle of evening prayers when the mosque was packed with about 300 worshippers.

Abdulhai Walizada, a local police spokesman, said there appeared to be more than one attacker, with a suicide bomber who detonated explosives and another who threw grenades at worshippers.

"We strongly condemn this heinous terrorist attack, which targeted a holy place and innocent people," the statement said.

The ministry expressed Turkey's "condolences to the government and brotherly people of Afghanistan."

Shiites, a minority of around three million in overwhelmingly Sunni Afghanistan, and have been threatened by a Daesh affiliate that operates in the country's east and they accuse police and troops of failing to protect them.

No one immediately claimed responsibility for the attack on the Jawadia Mosque, the largest Shiite Muslim mosque, in Herat. However, it came a day after the Daesh group said it had carried out a deadly assault on the Iraqi embassy in Kabul as it extends its footprint in the war-torn country.

Taliban spokesman Qari Yosuf Ahmadi said in a statement that his group had nothing to do with the attack.

On June 15, a terrorist attack on a Shiite community mosque in the capital Kabul involving at least two suicide bombers killed at least six people.

On June 6, an improvised explosive device attack at main gate of the iconic Jama Masjid in Herat left at least eight people dead.

In July 2016, twin explosions ripped through crowds of Shiite Hazaras, killing at least 85 people and wounding more than 400.

Shiites prepared to take to the streets of Afghanistan's Herat Wednesday following the attack as anger grew over authorities' failure to prevent the latest assault on the minority community.

"We are going to bury the bodies this afternoon and then hit the streets demanding justice," said a sobbing Farhad Dost, whose cousin died in the attack.

"I lost all my loved ones, they even killed children as young as seven. This wasn't an attack on Shiites, this was an attack on all Afghans, all Muslims," he told AFP.

"The police checkpost is around 100 meters from the mosque. They didn't even try to stop the attackers. They all fled when they heard the blasts," said a distraught Dost.

Angry locals then clashed with the police and set the checkpost on fire, according to witnesses who reported that officers opened fire, injuring some demonstrators.