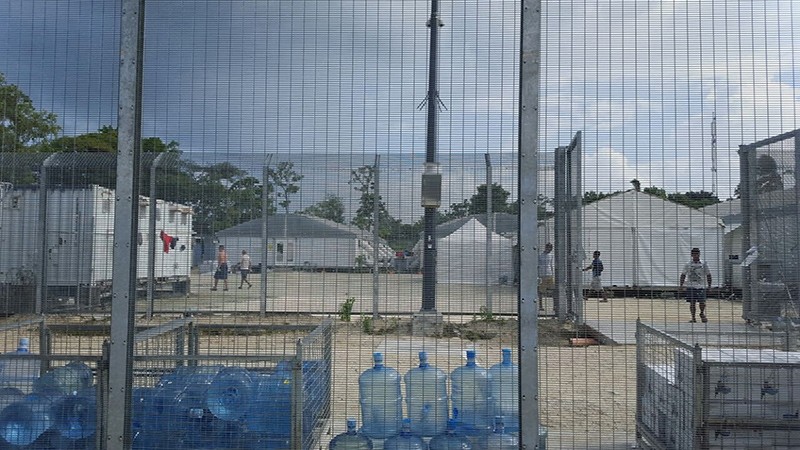 etainees walk around the compound among water bottles inside the Manus Island detention centre in Papua New Guinea, February 11, 2017 (Reuters File Photo)
by Compiled from Wire Services Aug 07, 2017 12:00 am

A refugee being held in an Australian immigration camp on Papua New Guinea has died. His death has sparked outrage from fellow refugees and advocates who say officials failed to treat him despite a long history of mental illness.

Australia sends anyone who tries to enter by boat without a visa to remote processing facilities in Nauru and on Papua New Guinea's Manus Island. Even those subsequently found to be genuine refugees are barred from settling in Australia.

The Refugee Action Coalition said the Iranian man was found hanging from a tree, although this was not confirmed and it is unclear whether it was suicide.

"This death is yet another bleak tragedy to arise out of the ongoing suffering and tensions on Manus Island," Amnesty International Australia said.

"There must be an independent, impartial, prompt and effective investigation into his death."

The Human Rights Law Centre said the man was the fifth held on Manus to die since Canberra's offshore regime began in July 2013.

"This man deserved to be treated with basic decency and respect. He deserved a chance to rebuild his life in freedom and safety," said Daniel Webb, director of legal advocacy at the law centre.

"Instead, our government chose to be cruel, imprisoning him indefinitely on a remote island in truly awful conditions."

Conditions in the camp, and the other one on Nauru in the Pacific, have been widely criticised by refugee advocates and medical professionals, with reports of widespread abuse, self-harm and mental health problems.

A PNG court ruled last year that holding people on Manus was unconstitutional, and Canberra is set to shut the camp in October.