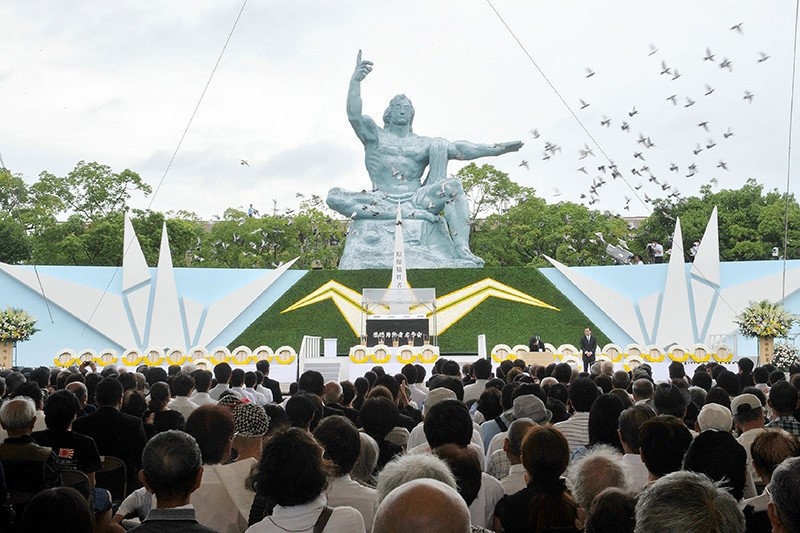 Doves fly beside the monument during a ceremony for atomic bomb victims at the Peace Memorial Park in Nagasaki, western Japan, August 9, 2017. (AFP Photo)
by Associated Press
Aug 09, 2017 12:00 am

Amid growing tension between Washington and North Korea, the mayor of Nagasaki said Wednesday that the fear of another nuclear bomb attack is growing at a ceremony marking the 72nd anniversary of the U.S. atomic bombing of his city.

Nagasaki Mayor Tomihisa Taue urged nuclear states to abandon such weapons and criticized Japan's government for not taking part in the global effort toward a nuclear ban.

The bombing anniversary comes just as Pyongyang and Washington are trading escalating threats. President Donald Trump threatened North Korea "with fire and fury" and North Korea's military said Wednesday that it was examining its plans for attacking Guam.

"The international situation surrounding nuclear weapons is becoming increasingly tense," Taue said at Nagasaki's Peace Park. "A strong sense of anxiety is spreading across the globe that in the not too distant future these weapons could actually be used again."

At 11:02 a.m., when the bomb struck 72 years ago, people at the ceremony observed a moment of silence as the peace bell rang.

"The nuclear threat will not end as long as nations continue to claim that nuclear weapons are essential for their national security," Taue said.

Taue sharply criticized Prime Minister Shinzo Abe's government for what he said were empty promises about working to achieve a nuclear-free world. He said Japan's absence even during diplomatic negotiations for the U.N. Nuclear Prohibition Treaty, adopted in July, is "incomprehensible to those of us living in the cities that suffered atomic bombings."

The outspoken mayor praised the atomic bombing survivors, or "hibakusha," for their lifelong devotion to the effort. He urged Japan's government to change its policy of relying on the U.S. nuclear umbrella and join the nuclear prohibition treaty as soon as possible.

"Nuclear weapons are incompatible with mankind," said Yoshitoshi Fukahori, an 88-year-old survivor of the Nagasaki atomic bombing who lost his sister in the blast. He said that as he rushed home the morning after the bombing, the shocking view from the hilltop — his hometown flattened and the landmark Catholic church on fire — made him cry.

Fukahori, who operates a library of atomic bombing photos, said Japan, which has since rebuilt itself as a pacifist nation, should never lose the respect and trust it has regained from the international community.

Abe, in a speech that was almost a repeat of what he said in Hiroshima, did not mention the U.N. nuclear ban treaty.

More than 175,000 hibakusha have died in Nagasaki since the attack, including 3,551 in the past year, while over 300,000 of their peers have died in Hiroshima. The average age of the survivors is more than 81 years. Many suffer from lasting effects of radiation.