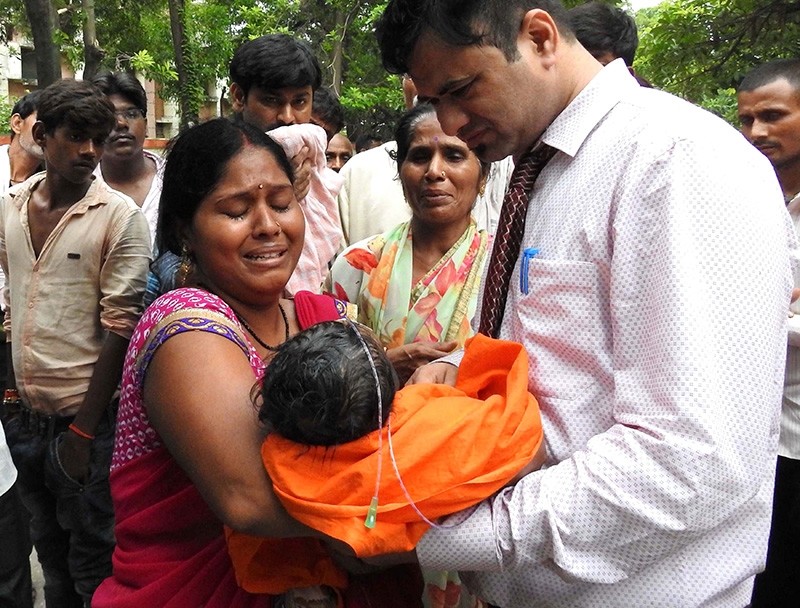 Relatives mourn the death of a child at the Baba Raghav Das Hospital in Gorakhpur, in the northern Indian state of Uttar Pradesh, on August 12, 2017. (AFP Photo)
by Compiled from Wire Services Aug 12, 2017 12:00 am

At least 60 children have died over five days at a government hospital in northern India that suffered oxygen shortages, officials said Saturday amid fears the toll could rise.

Authorities said they have launched an inquiry but denied reports that a lack of oxygen had caused the deaths at the Baba Raghav Das Hospital in Gorakhpur district in Uttar Pradesh state, which is ruled by Prime Minister Narendra Modi's Bharatiya Janata Party.

Indian media said 30 children died on Thursday and Friday after oxygen supply was disrupted in wards housing the sick, allegedly because the suppliers' bills were not paid.

"We have launched an inquiry and a preliminary report should be out today. Yes, sixty patients have died at the hospital in the last five days but we don't think it's linked to reports of oxygen shortage," Anil Kumar, Gorakhpur's divisional commissioner told AFP.

A statement shared by the office of state chief minister Yogi Adityanath, which has ordered the inquiry, said that all 60 deaths had occurred at the hospital's pediatric ward over a five-day period starting Monday.

Twenty-three children died on Thursday, when, according to the statement, "the pressure of the liquid oxygen supply became low and 52 reserve oxygen cylinders were pressed into service."

The BRD Medical College specified that 34 were babies who died at the neo-natal intensive care unit, while 12 died because of encephalitis. The rest died of other unspecified causes.

Local media reports have said some of the deaths were caused due to an oxygen shortage after a private supplier withdrew its equipment over unpaid hospital dues.

BRD Medical Chief Medical Superintendent Dr R.S. Shukla denied the deaths had been caused by a lack of oxygen supplies when asked by Reuters.

The prime minister's office on Twitter said that Modi was "monitoring the situation in Gorakhpur" and was in touch with the state authorities.

The hospital, in a statement, said there had been a "drop in pressure in the supply of liquid oxygen" on Thursday, but added cylinders were procured from various other suppliers. It did not specify whether that had resulted in any deaths.

The breakdown of the death toll provided by the hospital showed a spike on Thursday, with 23 fatalities, including 14 babies at its neo-natal unit.

The Hindustan Times newspaper on Saturday described chaotic scenes at the hospital as oxygen supply was disrupted.

"Even as 90 jumbo oxygen cylinders were pressed into service to maintain the supply on Friday, the hospital ran out of oxygen around 1.00am," it said.

"What followed was complete chaos as panic-stricken relatives of patients ran for help, and with the support of hospital staff tried to maintain supply of oxygen... using artificial manual breathing bags.

"However several patients started collapsing due to inadequate supply," it added.

The region is also one of India's poorest and registers hundreds of child deaths each year from Japanese Encephalitis and Acute Encephalitis Syndrome, which is rife in parts of eastern and northern India, especially during the monsoon season. The disease is most often caused by contaminated food or water, mosquito bites, or through breathing in respiratory droplets from an infected person.

"We will be getting more liquid oxygen cylinders tonight or tomorrow, and have also cleared the dues of the supplier," district official Kumar told AFP.

He added that the deaths "could be (due to) natural (causes), as many patients admitted at the hospital are serious."

India's Nobel Peace laureate Kailash Satyarthi, a campaigner for children's rights, described the deaths as "a massacre" on Twitter.

"Thirty kids died in hospital without oxygen. This is not a tragedy. It's a massacre. Is this what 70 years of freedom means for our children?" he said.

The state's health minister Sidharth Nath Singh suspended the hospital's top official, holding him accountable for the disruption of oxygen supply until the completion of a formal investigation.

"There were multiple reasons for the disruption of oxygen supply, which are being investigated, but our probe has revealed that no deaths happened because of this," the minister told reporters after a visit to the hospital.

The deaths have sparked a political firestorm as opposition politicians sought to pin the blame on Modi's Bharatiya Janata Party, which rules the state.

The hospital is located in Gorakhpur district, which is represented by Uttar Pradesh chief minister Yogi Adityanath, who was appointed to head the state this year.

"The current government is responsible for the deaths of children in Gorakhpur due to the lack of oxygen. Strict action should be taken," tweeted former Uttar Pradesh chief minister Akhilesh Yadav.

India spends about one percent of its GDP on public health, among the lowest in the world. Successive governments have faced criticism for not reforming the overburdened public health system which is still plagued with shortage of doctors and dilapidated infrastructure.