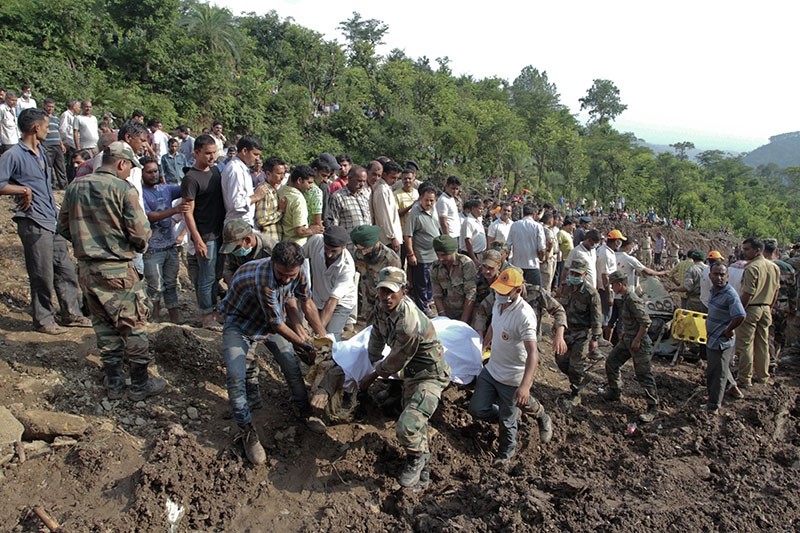 Army soldiers and rescue workers recover bodies of landslide victims even as they try to pull out two buses that were covered in mud after a landslide. (AP Photo)
by Aug 13, 2017 12:00 am

Monsoon floods and landslides have killed at least 66 people across Nepal and India but officials fear that figure could almost double as rescuers search for dozens believed lost under mud and in submerged villages.

Authorities Sunday upgraded the death toll from flash flooding across landlocked Nepal to 49 as the water kept rising, forcing thousands to flee for higher ground.

"Another 17 are missing. Search and rescue works are underway but the water levels have not declined yet," said Shankar Hari Acharya, the chief of Nepal's national emergency center.

The Red Cross estimated a higher death toll of 53, with dozens more missing and injured and thousands of homes destroyed.

In neighboring India, rescuers were desperately trying to reach two packed buses swept into a gorge by a landslide so powerful it destroyed an entire stretch of highway.

The coaches had stopped for a tea break around midnight Saturday in Himachal Pradesh when tonnes of rock and mud cascaded down a mountainside.

Seventeen bodies have been recovered from the accident site in the Himalayan state, said Sandeep Kadam, a senior official at the scene.

But dozens were still missing somewhere at the bottom of the ravine, with soldiers and rescuers clawing through the mud and rock to reach them.

Indian Prime Minister Narendra Modi extended his condolences and prayers for those affected by the accident.

"Pained by the loss of lives due to landslide-related accidents in HP's Mandi district," he posted on Twitter, using the acronym for Himachal Pradesh state.

The disaster followed days of heavy rain, which loosens the soil on steep hillsides and threatens villages at the foot of mountains every monsoon season.

Hundreds have died across India in torrential rain, floods and landslides since the onset of the wet season in April.

In Nepal the toll from this year's monsoon -- which typically lasts from late June until the end of August -- has already eclipsed last year, with more than 100 people confirmed dead.

Last weekend in the central lowlands, four girls from the same family drowned when they fell into a flooded roadside ditch.

Nepal's weather department warned that heavy rain was expected to continue for another day, following days of torrential downpours.

"There isn't a house without water," said Raghu Ram Mehta, a resident of the southern district of Sunsari which has suffered nine deaths, the highest of any district.

"Hundreds of families are taking shelter in local schools."

Families perched on trees with young children overnight as flood waters swept away homes in a village in the southern district of Chitwan, local media reported.

In the popular jungle safari resort of Sauraha in Chitwan, hotels were forced to shift their guests to higher floors as water rushed in.

A hotel owner said they used elephants to transport tourists to the nearest open highway and airport to help them return to the capital Kathmandu.

Biratnagar airport in the eastern district of Morang was closed after being submerged in a meter of water, authorities at the international terminal said.

"I have already instructed authorities concerned to rescue flood victims, move them to safer locations and immediately provide relief to them," Prime Minister Sher Bahadur Deuba said in a video recording Saturday.