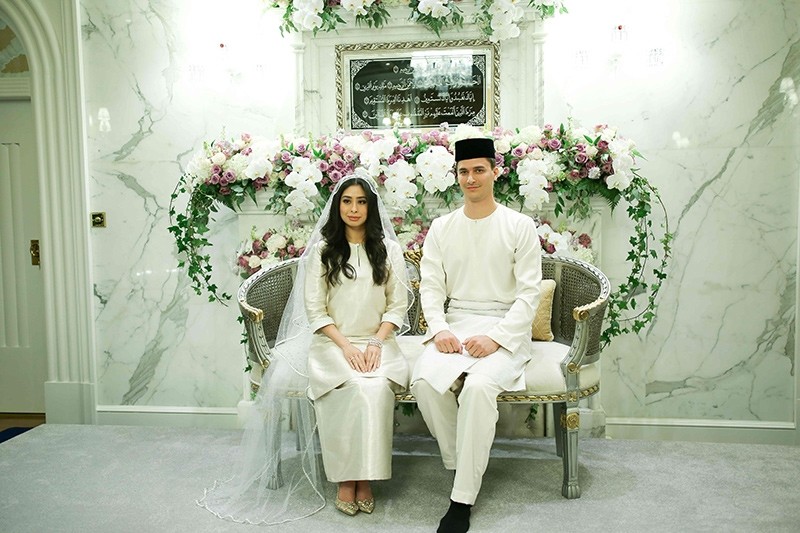 This handout photograph made available on August 14, 2017 by the Royal Press Office shows Dennis Muhammad Abdullah (R) of the Netherlands posing with his bride, Princess Tunku Tun Aminah Sultan Ibrahim (L) (AFP Photo)
by Aug 14, 2017 12:00 am

The daughter of one of Malaysia's most powerful sultans married her Dutch fiance Monday in a ceremony steeped in centuries of tradition during a day of lavish celebrations.

Princess Tunku Tun Aminah Sultan Ibrahim, 31, the only daughter of the Sultan of Johor, tied the knot with Dennis Muhammad Abdullah, 28, capping a romance of over three years.

The Dutchman, who has converted to Islam, and the princess wed according to Muslim Malay custom at the Serene Hill Palace, the royal family's residence in the southern city of Johor Bahru. The private ceremony was attended by close family and friends.

The groom wore traditional white Malay wedding attire and the bride wore a white dress. Dennis Muhammad placed the wedding ring on Tunku Aminah's finger in a special room in the palace, according to the royal press office.

In keeping with centuries-old wedding customs in the Muslim-majority southern state of Johor, he also gave her a dowry of 22.50 ringgit (about $5), and the couple kissed the hands of their parents, aunts and uncles as a mark of respect.

An evening reception will be the main event which will feature a "sitting-in-state" ceremony, with some 1,200 guests due to attend and crowds expected to watch the event on a big screen in a city square.

There have been frenetic preparations in recent days, with the grounds of the main palace decorated with bunting and main streets adorned with flags.

"I am taking my wife and two young children to the city square tonight to witness the live broadcast of the evening celebrations," Azim Mohamad Nurazim, a 34-year-old local salesman, told AFP.

"It is a celebration for all Johoreans. My message to Tunku Aminah and her husband is long and healthy life, and may Allah bless the couple with lots of children."

The Dutchman, who now works for a property development company in Johor, was born Dennis Verbaas and adopted a Muslim name when he converted to Islam in 2015.

Johor's royal family is rich and powerful and possesses its own private army -- the only state to have one.

Malaysia has a unique arrangement in which the throne of the Muslim-majority country changes hands every five years between the rulers of the nine states which are still headed by Islamic royalty.

The current king is Sultan Muhammad V, from the conservative Islamic northern state of Kelantan, who steps down in 2021.

But Dennis Muhammad is unlikely ever to assume the role since the rulers choose among themselves who the next king will be.