US has 'no interest' in North Korea regime change: Mattis, Tillerson 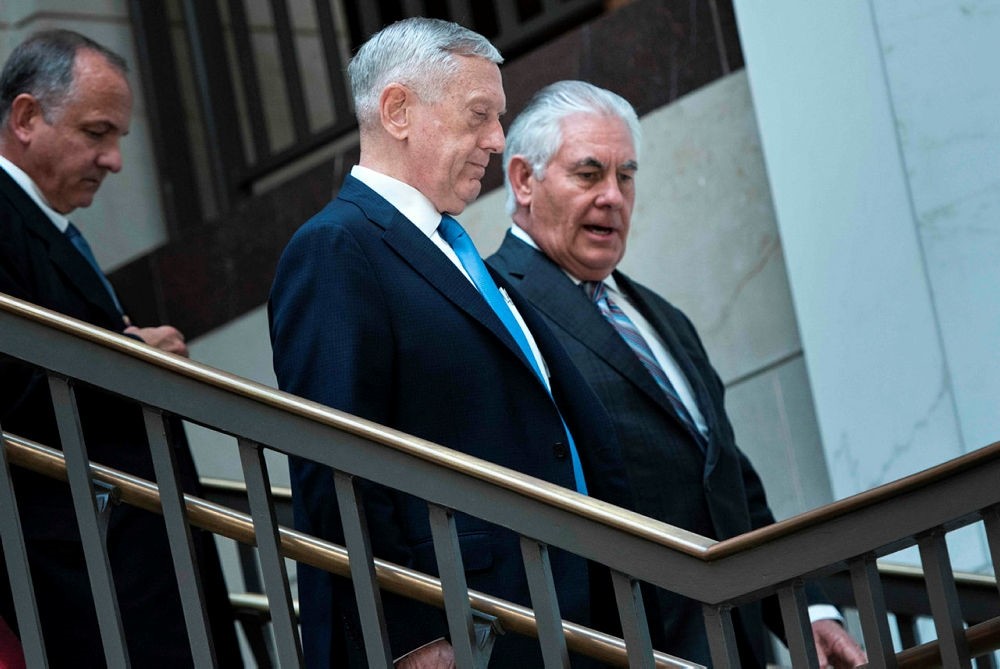 US Secretary of Defense Jim Mattis (C) and US Secretary of State Rex Tillerson (R) arriving for a closed meeting of the Senate Foreign Relations Committee on Capitol Hill in Washington, DC. (AFP Photo)
by Daily Sabah with AFP Aug 14, 2017 12:00 am

America has "no interest" in regime change in Pyongyang or the accelerated reunification of the two Koreas, two top US officials said in a message calibrated to cool last week's heated rhetoric.

Pentagon chief Jim Mattis and Secretary of State Rex Tillerson said in a Wall Street Journal opinion piece that the United States favors a diplomatic solution to the nuclear stand-off, especially with help from China, though they stressed diplomacy is "backed by military options."

Mattis also warned later on the same day that if the hermit kingdom fires a missile, "it could escalate into war."

"The US has no interest in regime change or accelerated reunification of Korea," Mattis and Tillerson added.

"We do not seek an excuse to garrison US troops north of the Demilitarized Zone. We have no desire to inflict harm on the long-suffering North Korean people, who are distinct from the hostile regime in Pyongyang."

The message, published Sunday evening, came after tensions soared between North Korea and the United States last week after President Donald Trump made repeated bellicose statements to Kim Jong-Un, including the promise of "fire and fury" if Pyongyang continued to threaten America with nuclear weapons.

Mattis and Tillerson called on China, which is North Korea's main trading partner and ally, to take advantage of an "unparalleled opportunity" to assert its influence on Pyongyang.

"If China wishes to play a more active role in securing regional peace and stability -- from which all of us, especially China, derive such great benefit -- it must make the decision to exercise its decisive diplomatic and economic leverage over North Korea," the US officials wrote.

Their opinion piece came the same day as CIA director Mike Pompeo offered assurances there was "nothing imminent" in terms of conflict with North Korea.

Mattis and Tillerson also credited UN efforts and said the United States was willing to negotiate with North Korea, but said Pyongyang should indicate a desire to show good faith by halting weapons and nuclear tests.

General Joseph Dunford, who is Chairman of the US Joint Chiefs of Staff and the top officer in the military, met Monday with South Korea's defense minister, Song Young-Moo, and defense chief, General Lee Sun-Jin.

And he "conveyed America's readiness to use the full range of military capabilities to defend our allies and the US homeland."