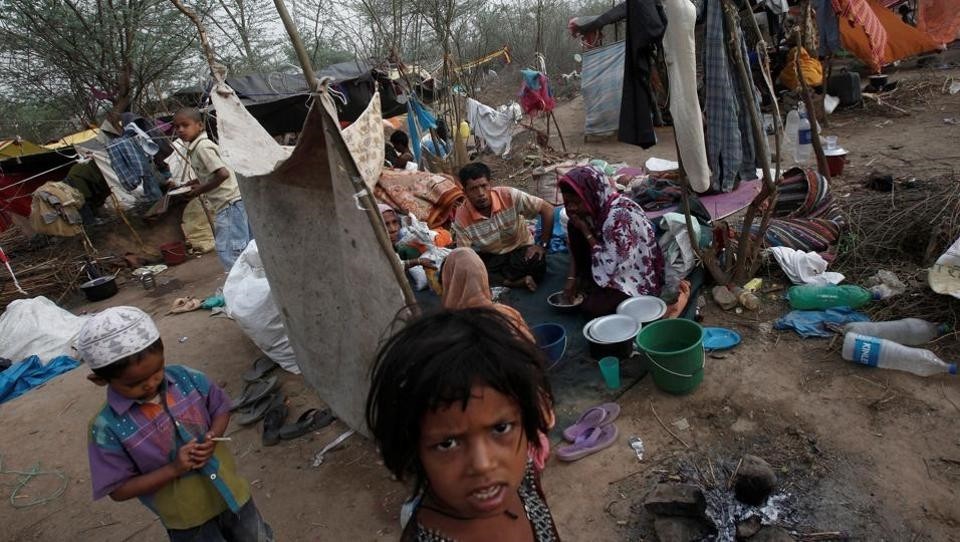 A family, who says they belong to the Burmese Rohingya Community from Myanmar, eats their breakfast at a makeshift shelter in a camp in New Delhi. (REUTERS Photo)
by Aug 17, 2017 12:00 am

Rights groups have condemned India's plan to deport some 40,000 Rohingya Muslims, saying India should abide by its legal obligations and protect the stateless refugees who face persecution in Myanmar.

Junior interior minister Kiren Rijiju told parliament last week the central government had directed state authorities to identify and deport all illegal immigrants including Rohingya, even those registered with the U.N. refugee agency.

"Indian authorities are well aware of the human rights violations Rohingya Muslims have had to face in Myanmar and it would be outrageous to abandon them to their fates," said Raghu Menon, advocacy manager at Amnesty International India.

"It shows blatant disregard for India's obligations under international law," he said in a statement on Wednesday.

The Rohingya are denied citizenship in Buddhist-majority Myanmar and classified as illegal immigrants, despite claiming centuries-old roots.

Hundreds of thousands of Rohingya have fled Myanmar, where they face atrocities, including murder, rape and arson attacks, with many taking refuge in Bangladesh, and some then crossing a porous border into Hindu-majority India.

Many have also headed to Southeast Asia, often on rickety boats run by people-smuggling gangs.

The Rohingya are generally vilified in India, and there has been a series of anti-Rohingya protests in the past few months.

The United Nations High Commissioner for Refugees (UNHCR) has issued identity cards to about 16,500 Rohingya in India.

India is not a signatory to the 1951 Refugee Convention, which spells out states' responsibilities towards refugees. Nor does it have domestic legislation to protect the almost 210,000 refugees it hosts.

But Asia's third largest economy is bound by customary international law not to forcibly return refugees to a place where they face danger, rights groups say.

"The government should put an end to any plans to deport the Rohingya, and instead register them so that they can get an education and health care and find work," Meenakshi Ganguly, South Asia director at Human Rights Watch, said on Thursday.