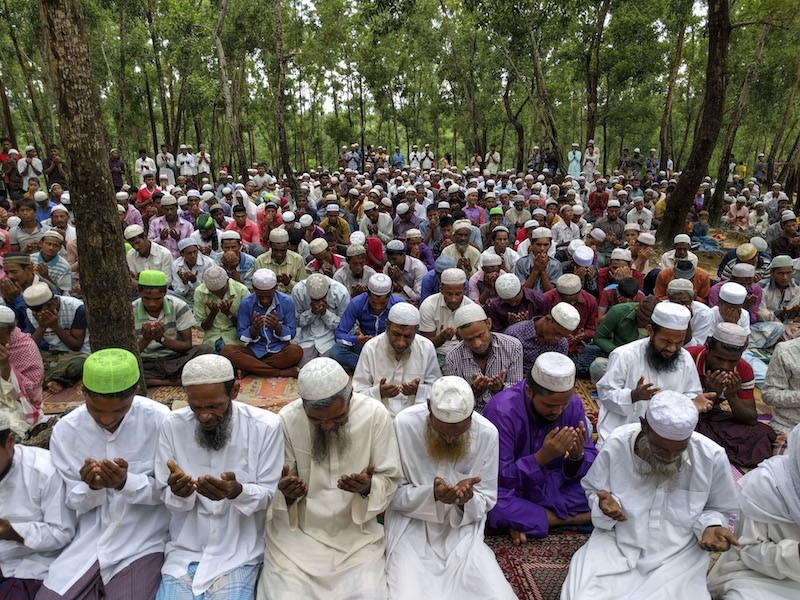 Rohingya Muslim refugees who had escaped persecution in their home country offered Eid prayers Saturday in Bangladesh, many of them recent arrivals fleeing a surge in communal violence in neighboring Myanmar.

The holiday comes as renewed violence in Myanmar's Rakhine state forces thousands of Rohingya -- a stateless ethnic minority -- to seek refuge in Bangladesh, with many drowning as they attempt to cross the border river in makeshift boats.

It is the bloodiest chapter yet in a bitter five-year crisis that has torn apart Rakhine along ethnic and religious lines, displaced the Rohingya in huge numbers and heaped international condemnation on Myanmar's army and the government of Aung San Suu Kyi.

"I had everything at my home... but now I've become a refugee. There's nothing much to celebrate. Yet it is our duty to perform the Eid prayer," said 39-year-old Makbul Hossain who made the dangerous crossing from Rakhine to the Bangladesh border town of Cox's Bazar last week.

Goats, sheep and cows are slaughtered worldwide to celebrate the major Muslim festival of Eid-ul-Adha, which is known as the Feast of the Sacrifice.

"I used to sacrifice my own animals during Eid," said 60-year-old farmer Deen Mohammad.

But he was forced to flee for his safety after the latest round of violence erupted late August when Rohingya militants swarmed police posts, killing 15 officials and burning villages.

"When the fighting started I left my homestead with everything. I am penniless here," he told AFP, breaking down in tears.

Amid monsoon rains, small-scale festivities were under way in refugee camps in Cox's Bazar, where many have taken cover in schools that have closed for Eid.

The Rohingya are reviled in Myanmar, where the roughly one million-strong community are accused of being illegal immigrants from Bangladesh.

Since violence broke out, the UN has estimated 40,000 people -- mostly women and children -- have fled to Bangladesh, while nearly 400 people have died in the fighting between Myanmar troops and Rohingya militants, according to the army chief.

Around 20,000 more have been stranded at the no man's land between the two countries' borders.

Rakhine has been the crucible of religious violence since 2012, when riots erupted killing scores of Rohingya and forcing tens of thousands of people -- the majority from the Muslim minority -- into displacement camps.