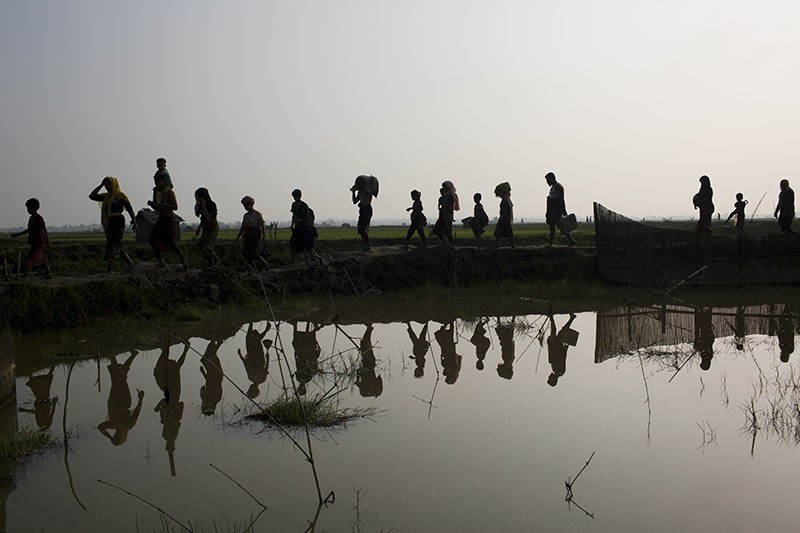 Members of Myanmar's Rohingya ethnic minority walk through rice fields after crossing the border into Bangladesh. (AP Photo)
by Associated Press Sep 05, 2017 12:00 am

A massive influx of Rohingya refugees fleeing recent violence in Myanmar has pushed aid services in Bangladesh to the brink, with established camps already beyond capacity, aid workers said Tuesday.

The U.N. refugee agency said a total of 123,000 refugees have fled western Myanmar since Aug. 25.

"The numbers are very worrying. They are going up very quickly," said UNHCR spokeswoman Vivian Tan.

The agency was pleading for assistance, saying it needed more land so it could set up new camps to accommodate refugees who were arriving hungry, traumatized and in need of medical assistance.

"Most have walked for days from their villages — hiding in jungles, crossing mountains and rivers with what they could salvage from their homes," the agency said in a statement.

"An unknown number could still be stranded at the border," it said.

Indeed, a Rohingya Muslim whom The Associated Press reached by phone said she and thousands of fellow villagers driven from their homes by the violence in Myanmar are now stuck along the coast, hoping to flee to nearby Bangladesh by boat.

The 18-year-old provided AP with cellphone photographs she took Tuesday along the beach in southern Maungdaw township in Rakhine state. Several of the photos show hundreds of people sitting on the ground, with small sacks or plastic bags holding their meager belongings. Only some had tarps or umbrellas to protect themselves from the sun.

The teenager, who spoke on condition of anonymity out of concern for her safety, said her family's house was burned Aug. 25, right after Rohingya insurgents attacked Myanmar border guard police outposts.

The military has said nearly 400 people, most of them insurgents, have died in clashes. Security forces responded to the attacks with days of "clearance operations" the government says were aimed at rooting out insurgents it accuses of setting fire to Rohingya villages.

Many displaced Rohingya, however, said it was Myanmar soldiers who set their homes aflame and fired indiscriminately around their villages in Rakhine state. Rohingya Muslims have long faced discrimination in the majority-Buddhist Southeast Asian country.

The teenager said that since the attacks, Rohingya from Myin Hlut and surrounding villages fled as the army burned houses. Initially they fled into nearby forests, she said, but they moved to the beach in hopes of making it clear to the army that they are not insurgents.

She said she and other villagers reached the beach four days ago and lack adequate food and drinking water. She said villagers have been drinking salty water from the Bay of Bengal.

She said Myanmar soldiers come to the beach two or three times a day to check on the displaced villagers. The Rohingya are barred from returning to their villages, she said.

In Bangladesh, aid agencies said there was an urgent need for emergency shelters and medical aid as more refugees arrive.

The UNHCR's new refugee estimate of 123,000 Tuesday was the result of aid workers conducting new, more accurate counts that revised Monday's estimate up from 87,000, Tan said.

Roughly 1 million Rohingya were believed to have been in Myanmar previously, though estimates vary.

Tens of thousands of new refugees have been taken in at established camps that have been housing Rohingya since the 1990s, but those camps have reached "breaking point," the U.N. refugee agency said. Thousands of others were now sheltering under emergency tents, in makeshift camps or out in the open wherever they found space.

In Myanmar, the stranded villager and her father told the AP that boats from Bangladesh have come near the shore every day to take villagers north to Bangladesh, and that the price is 150,000 kyats ($110) per person.

The villager said she didn't know where the boats end up, but that she and her family will try to get onto one if there is a chance for them to flee.

One of the photos she took shows about a dozen small wooden boats in the background. Many boats along the shore are owned by Rohingya fishermen, but the government has banned them from using them for many months.