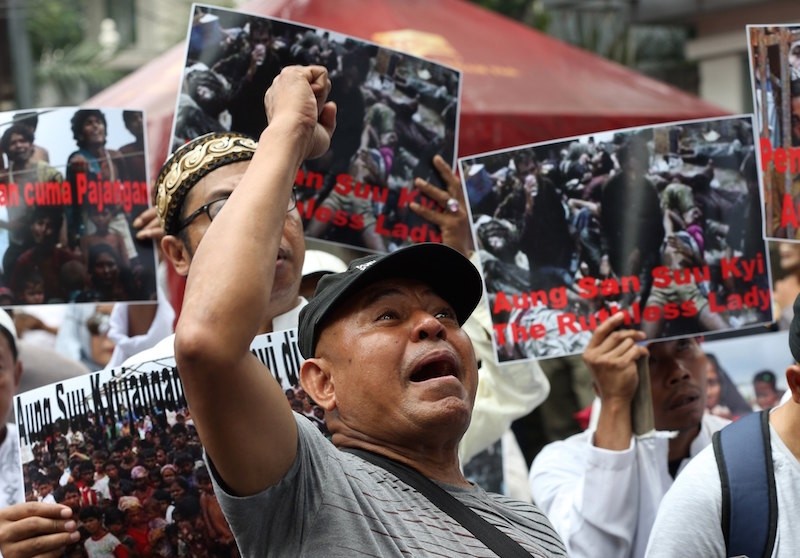 Muslims in Indonesia held demonstrations outside the Myanmar embassy in Jakarta Wednesday, demanding an end to violence against the country's Rohingya Muslim minority.

Thousands of demonstrators, many in white Islamic robes and skullcaps, walked through the capital's streets to converge outside the embassy in downtown Jakarta.

Persecution of the Rohingya, reviled as illegal immigrants and mostly denied citizenship in Myanmar, has been a lightning rod for anger in Indonesia and across the Muslim world.

"I think this is not only a religion issue, but moreover a humanitarian issue. What is happening there is very cruel," Tita Fatmawati, a teacher from nearby Bogor, told AFP.

About 6,000 armed police and military officers were deployed to guard the embassy, which was cordoned off behind barbed wire, Jakarta's police spokesman told AFP.

Authorities have been on alert since Sunday after a molotov cocktail was thrown at the embassy.

Nearly 125,000 mostly Rohingya refugees have crossed the border to Bangladesh in recent weeks, fleeing a security sweep by Myanmar forces who have been torching villages in response to attacks by Rohingya militants on August 25.

The refugee exodus has enraged many in Indonesia, the world's largest Muslim majority country.

The country's foreign minister, Retno Marsudi, wrapped up a two-day visit to Myanmar on Tuesday, where she urged Suu Kyi as well as army chief General Min Aung Hlaing to help resolve the crisis.