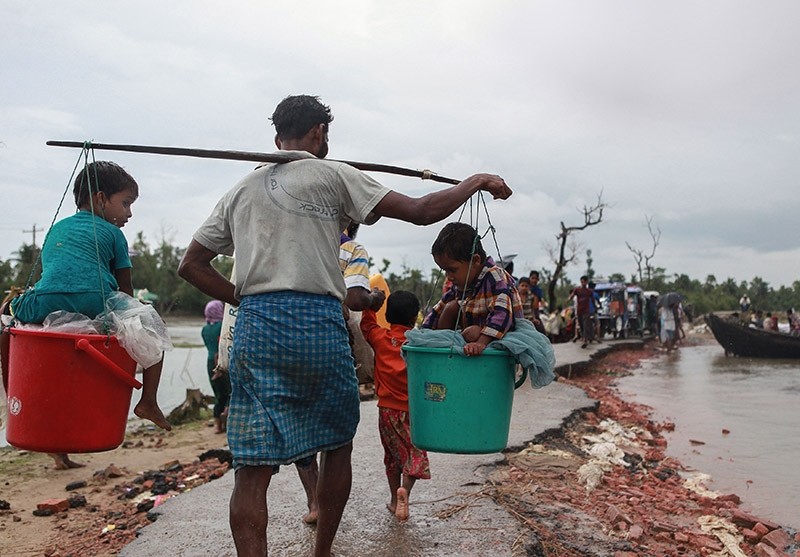 A Rohingya refugee carries two children in buckets as they arrive in Bangladesh at Shah Porir Dwip in Teknaf on September 9, 2017, as they flee violence in neighbouring Myanmar. (AFP Photo)
by Compiled from Wire Services Sep 09, 2017 12:00 am

Nearly 300,000 Rohingya Muslims have fled Myanmar's Rakhine state into Bangladesh in the 15 days since new violence erupted and the United Nations is braced for a further surge, officials said Saturday.

The exodus figure has jumped about 20,000 in a day and from 164,000 on Thursday. Bangladesh authorities plan to build a camp that could house a quarter of a million people.

"Some 290,000 Rohingya arrived in Bangladesh since August 25," Joseph Tripura, a spokesman for the UN refugee agency, told AFP.

New violence started on August 25 after Rohingya militants attacked police posts in Rakhine, triggering a security forces crackdown. Those who have fled across the border have accused the Myanmar military of staging reprisal attacks on Muslim villages.

Officials said the UN has found more Rohingya in Bangladesh villages and areas which were previously not included by relief agencies.

Agencies are now bracing for a new increase in numbers.

He added: "We started with planning for an influx of 120,000. Then we made a resource planning for 300,000. The current influx has almost now reached 300,000. Now the WFP and the other UN agencies on the ground may have to review it again if the influx continues unabated."

Many of the newly arrived were initially stunned and traumatized after fleeing violence. They are now growing desperate in searching for food distribution points that appeared only in recent days, passing out packets of biscuits and 25-kilogram (55-pound) bags of rice.

One aid worker who asked not to be identified because they were not authorized to speak to the media said "stocks are running out" with the refugees' needs far greater than what they had imagined. "It is impossible to keep up," she said.

At one food distribution point, women were volunteering to help keep order by tapping people with bamboo sticks to gently urge them back in line. Weary women carried infants in their arms while clutching other children to their sides, afraid they might be separated in the crowds.

One 40-year-old man, faint with hunger, collapsed while waiting and could not stand again on his own strength when others tried to help him up. They drizzled water between his lips in an attempt to revive him, to no avail.

"Everyone is hungry. Everyone has been waiting for hours," said another aid worker, who also did not want to be identified by name.

Most of the Rohingya are arriving by foot or boat across Bangladesh's 278 kilometre (172 mile) border with Myanmar, a fourth of which is made up by the Naf river.

The Rohingya have long been subjected to discrimination in Buddhist-majority Myanmar, which denies them citizenship.

Myanmar's government regards them as illegal migrants from Bangladesh, even if they have lived in the country for generations.

Refugee camps near Bangladesh's border with Myanmar already had about 300,000 Rohingya before the upsurge in violence last month and are now overwhelmed.

Tens of thousands of new arrivals have nowhere to shelter from monsoon rains.

The latest figure takes the number of Rohingya refugees who have arrived in Bangladesh since earlier violence erupted last October to 377,000.

Those flocking into Bangladesh have given harrowing accounts of killings, rape and arson by Myanmar's army. Myanmar authorities deny any wrongdoing.

Most have walked for days and the United Nations says many are sick, exhausted and in desperate need of shelter.

The authorities fear that the Rohingya could move to other parts of Bangladesh which would create new problems.

"All the newly arrived Rohingya will be brought in this makeshift camp and housed," Cox's Bazar magistrate Khaled Mahmud told AFP, adding they were already moving Rohingya who took shelter on the roads.

A Bangladesh minister said the government had decided to create a huge new camp on nearly 2,000 acres of land near an existing UN facility.

He added that new arrivals will be registered and given aid.

Dhaka has repeatedly asked Myanmar to take back the Rohingya and address the causes of exodus.