US must be 'beaten to death' like a 'rabid dog' over new UN sanctions, North Korean group says 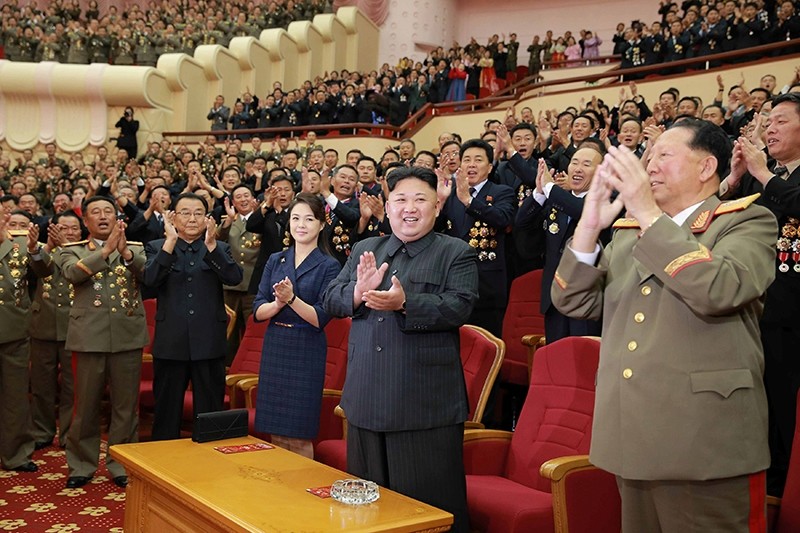 Kim Jong Un claps during a celebration for nuclear scientists and engineers who contributed to a hydrogen bomb test, in this photo released by North Korea's KCNA in Pyongyang on September 10, 2017. (REUTERS Photo)
by Sep 14, 2017 12:00 am

A North Korean organization demanded Thursday that the United States be "beaten to death" like a "rabid dog" for spearheading fresh UN sanctions on Pyongyang over its latest nuclear test, adding ally Japan should be "sunken into the sea".

The UN Security Council unanimously imposed an eighth set of sanctions on the North Monday, banning it from trading in textiles and restricting its oil imports, a week after Pyongyang tested what it said was a hydrogen bomb small enough to fit onto a missile, raising tensions on the peninsula.

A spokesman for the North's Korea Asia-Pacific Peace Committee (KAPPC) denounced the "heinous sanctions resolution" and said there were mounting calls for strong retaliation against the U.S. and its allies.

"The army and people of the DPRK are unanimously demanding that the Yankees, chief culprit in cooking up the 'sanctions resolution', be beaten to death as a stick is fit for a rabid dog," he said in a statement carried by the official KCNA news agency.

"Now is the time to annihilate the U.S. imperialist aggressors. Let's reduce the U.S. mainland into ashes and darkness," it said.

North Korea has a long history of issuing dramatic threats against the U.S. and its allies but not carrying them out.

According to the South's unification ministry, the KAPPC acts as "a window for improving relations with countries like the U.S. and Japan... while campaigning to change North Korea's closed and negative image".

But the KAPPC statement accused Tokyo of "dancing to the tune of the U.S." and warned of a "telling blow" against Japan, noting the missile test that overflew the Asian island nation last month.

"The four islands of the archipelago should be sunken into the sea by the nuclear bomb of Juche," KAPPC warned, referring to the North's national philosophy of "Juche" or self-reliance.

Experts believe Pyongyang's weapons program has made rapid progress under leader Kim Jong-Un, with previous sanctions having done little to deter it.