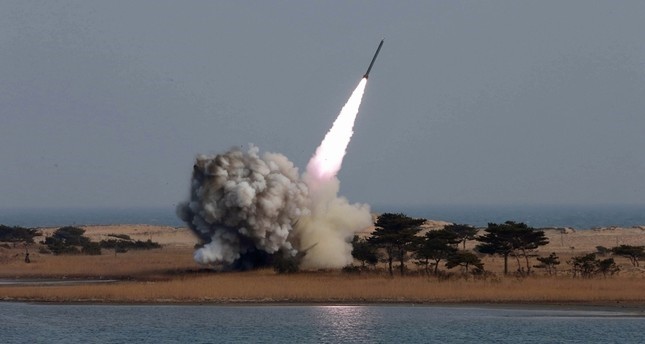 North Korea has fired a missile from Sunan district in its capital, Pyongyang, the South's Joint Chiefs of Staff (JCS) said early Friday.

The South Korean and U.S. militaries are analyzing details of the launch, the JCS also added.

Seoul's defence ministry said it probably travelled around 3,700 kilometres and reached a maximum altitude of 770 kilometres -- both higher and further than the previous device.

As the missile went eastward, authorities in Japan have urged citizens to take cover, reports said.

Tokyo later said that the missile flew over Japanese territory.

"We have strongly protested to the North, telling them the strong anger by the Japanese people and condemn with the strongest words possible."

The missile flew over Hokkaido in northern Japan "at around 07:06 am (2206 GMT) towards the Pacific Ocean", Japan's J-Alert system said, with reports saying it came down around 2,000 kilometres east of Hokkaido.

The launch came after the United Nations Security Council imposed an eighth set of sanctions on the country over its ballistic missile and atomic weapons programmes.

That was in response to its sixth nuclear test -- by far its largest yet -- earlier this month, which Pyongyang said was a hydrogen bomb small enough to fit onto a missile.

The North has raised tensions in the region with its rapid progress in weapons technology under leader Kim Jong-Un, who is closely associated with the programme and regularly pictured by state media overseeing launches and visiting facilities.

Its last missile launch, a Hwasong-12 intermediate range missile just over two weeks ago, also overflew Japan -- its first to do so for years -- sparking emergency sirens and text alerts, before coming down in the Pacific Ocean.

The South's President Moon Jae-In called an emergency meeting of Seoul's national security council, a standard procedure after the North fires a missile or tests a nuclear device.

Seoul's military carried out a ballistic missile drill of its own on Friday in the East Sea, Korea's name for the Sea of Japan, the Yonhap news agency reported.

In July, Pyongyang fired two intercontinental ballistic missiles that appeared to bring much of the US mainland into range.

It followed that up with an announcement it was planning to send a salvo of rockets towards the US Pacific territory of Guam, home to significant military facilities.

US President Donald Trump threatened it with "fire and fury", heightening fears of conflict.

The United Nations Security Council sanctions imposed on Monday are the strongest so far, banning the North's textile trade and imposing restrictions on shipments of oil products, among a series of other measures.

But analysts expect them to do little to dissuade Pyongyang, which says it needs nuclear weapons to defend itself against the threat of invasion by the US.