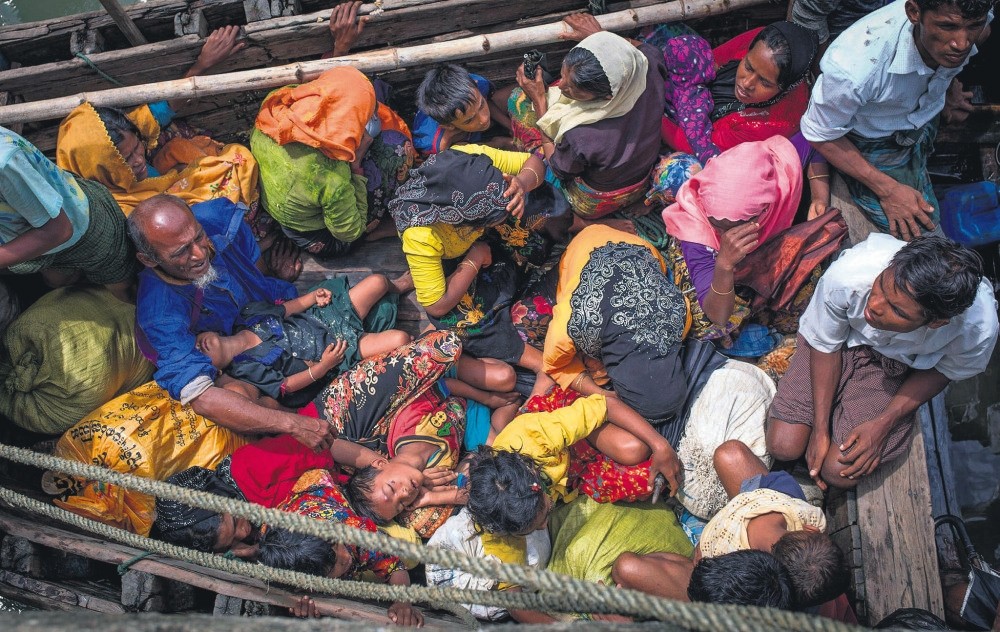 Rohingya refugees arriving by boat at Shah Parir Dwip on the Bangladesh side of the Naf River on Sept. 12.
by Daily Sabah with Wires Sep 15, 2017 12:00 am

At least 88 Rohingya Muslims have drowned trying to cross a river since violence erupted with the growing mass exodus hitting 400,000, UNICEF reports

Nearly three weeks into a mass exodus of Rohingyas fleeing violence in Myanmar, thousands were still risking their lives to cross into Bangladesh with more deaths at the Naf River. One of the dozens of boats carrying Rohingyas to the Bangladeshi border town of Teknaf capsized Thursday, and at least two people drowned, a report said. That brought known drownings in the Naf River to 88 since the crisis began.

Most of the 35 passengers aboard the boat managed to swim ashore, but the bodies of a woman and a child were found in the river separating the two countries, local police said. The human misery created by such massive displacement of men, women and children, under the threat of death, is getting worse every day. About 400,000 Rohingya Muslims have fled Myanmar since Aug. 25, the UN said yesterday, revealing the ongoing human tragedy.

"Up to 400,000 Rohingya have fled Myanmar for Bangladesh since Aug. 25, with thousands more arriving every day. Around 60 percent are children," the UN Children's Fund, UNICEF, said in a statement. "There are acute shortages of everything, most critically shelter, food and clean water," UNICEF's Representative in Bangladesh Edouard Beigbeder said.

UNICEF appealed for $7.3 million to provide emergency support to Rohingya children in Bangladesh over the next four months.

The thousands of Rohingya flooding into Bangladesh every day have arrived hungry and traumatized. Many need urgent medical care for violence-related injuries, severe infections or childbirth. Myanmar has accused the Rohingya of burning their own homes and villages, a claim the UN human rights chief criticized as a "complete denial of reality."

UN Secretary-General Antonio Guterres told reporters Wednesday that ethnic cleansing was taking place against Rohingya in Rakhine state. The term "ethnic cleansing" is defined as an effort to rid an area of an unwanted ethnic group — by displacement, deportation or even killing.

"I call on the Myanmar authorities to suspend military action, end the violence, uphold the rule of law and recognize the right of return of all those who had to leave the country," the secretary general told a press conference.

Guterres also said the Myanmar government should either grant the Rohingya nationality or legal status that would allow them to live a normal life.

The UN Security Council called for "immediate steps to end the violence" and ensure civilian protections. Rohingya have faced decades of persecution in Buddhist-majority Myanmar and are denied citizenship despite centuries-old roots in the Rakhine region. It was the first time the council agreed on a united response to the crisis sparked by a military crackdown that followed attacks by Rohingya militants late last month.

Tens of thousands of Rohingyas have sheltered in refugee camps in Rakhine since communal violence flared in mid-2012. The state is home to around 1.2 million Rohingyas, who have long been officially labeled Bengali, suggesting they are illegal immigrants from Bangladesh. Despite having lived in the area for generations, Rohingyas were effectively denied citizenship with a 1982 nationality law and have restricted basic rights such as freedom of movement. According to the law, foreigners cannot become naturalized citizens of Myanmar unless they can prove a close familial connection to the country.