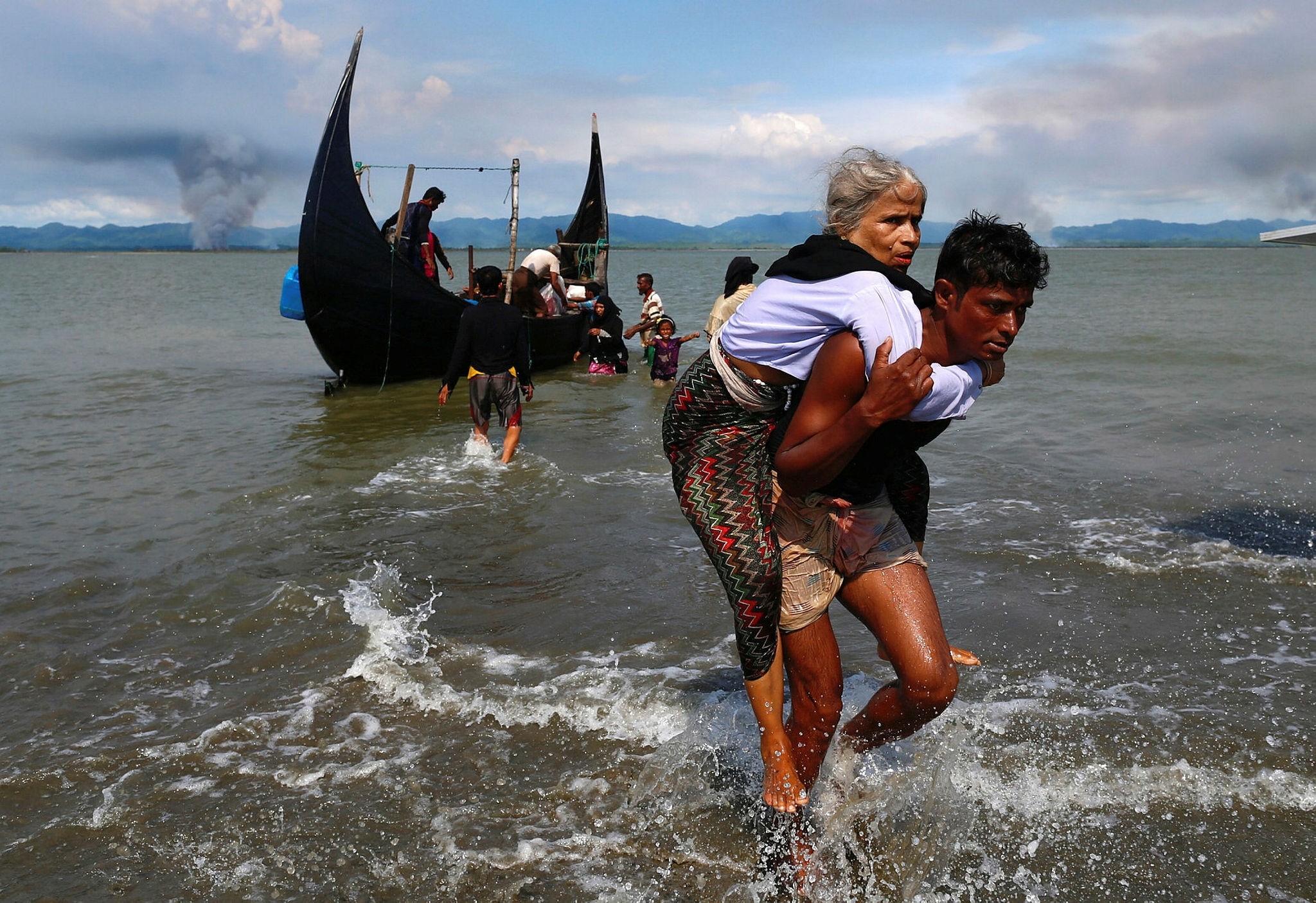 Smoke rises on Myanmar's side of border as an old Rohingya refugee woman is carried after crossing the Bangladesh-Myanmar border by boat through the Bay of Bengal, Sept. 15.
by Compiled from Wire Services Sep 16, 2017 12:00 am

Rohingya Muslims fleeing Myanmar violence are in desperate need of food and shelter as the mass exodus of Rohingya Muslims, including 240,000 children, continues

Rohingya Muslims from Myanmar's restive Rakhine state continue to stream into Bangladesh, but the availability of relief goods is scarce and aid distribution is chaotic.

The supply of relief goods remains inadequate, as some 400,000 Rohingya Muslims, mostly women and children, crossed into Bangladesh after deadly ethnic violence erupted in Myanmar's Buddhist-majority Rakhine state on Aug. 25.

UNICEF spokeswoman Marixie Mercado says that figure - amounting to about 60 percent of the estimated 391,000 total refugees - includes about 36,000 children aged under 1 year old. She says the agency also estimates 52,000 pregnant and lactating women.

Mercado said that includes an estimated 1,100 unaccompanied minors who had crossed over the past week. She spoke at a regular briefing in Geneva on Friday that included comments from many U.N. agencies that were addressing the crisis in Bangladesh.

"As everybody here is going to tell you, the needs are seemingly endless and the suffering is deepening," Mercado said.

Chris Lom, Asia-Pacific spokesman for the U.N.'s International Organization for Migration, said by phone in the briefing that the figures amounted to rough estimates, adding, "there's not somebody with a clipboard registering them" as the people cross the border.

Lack of coordination has produced a chaotic situation as private businesses, volunteer organizations and well-off people distribute supplies on their own, said an official at the U.N. Refugee Agency (UNHCR).

"Three weeks into the crisis, we could not make it happen because no one was prepared for such an influx," Joseph Tripura of UNHCR told dpa on Thursday.

The U.N.'s World Food Program, which launched a food distribution scheme, had reached only 60,000 people as of Tuesday.

Turkey has been exerting great effort to solve the crisis in Myanmar and to lend support to Rohingya Muslims.

Turkey has ramped up its effort to find a diplomatic solution in Myanmar Turkish Foreign Minister Mevlüt Çavuşoğlu on Sept. 1 called on Bangladesh to open its doors to Rohingya Muslims fleeing violence in Myanmar's western Rakhine state. The chairman of Rohingya European council, Dr. Hyle Law and Mohammad Ibrahim, a Rohingya European council member, said, "Rohingya Muslims are praying for Turkey." Turkish President Recep Tayyip Erdoğan on Sept. 6 announced that Turkey will distribute 10,000 tons of aid to Rohingya Muslims. Foreign Minister Mevlüt Çavuşoğlu and Turkey's first lady Emine Erdoğan on Sept. 7 visited a refugee camp in Bangladesh to lend support to Rohingya Muslims fleeing violence in Myanmar's Rakhine state. The president also vowed to bring up the Rohingya issue during the U.N. General Assembly set for Sept. 20 in New York, adding that he discussed the crisis in Rakhine with nearly 30 world leaders, especially of Islamic countries.