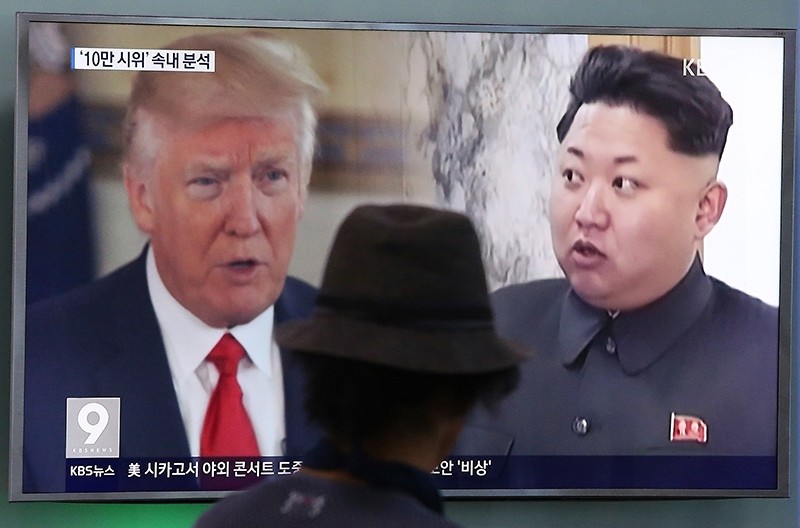 The international community is scrambling to contain an increasingly belligerent North Korea, which in recent weeks has prompted global alarm by conducting its sixth and largest nuclear test and firing long-range missiles over Japan that it says could reach the U.S. mainland.

"The two leaders agreed on more practical and stronger pressure... to make the North Korean regime realize that further provocation will only bring stronger diplomatic isolation and economic pressure leading to a path of collapse," the South's presidential office said in a statement.

Meanwhile, rather than releasing a statement Trump tweeted about his talks with Moon. In the tweet, U.S. President dubbed the North Korean leader Kim Jong-Un "Rocket Man," adding that long gas lines in the rogue nation are "too bad!"

Pyongyang says it needs nuclear weapons to protect itself from "hostile" U.S. forces and is determined to build a weapons system capable of delivering a nuclear warhead to hit the U.S. mainland.

Kim Jong-Un, who oversaw the latest missile test, has said the launch increased the "combat power of the nuclear force", according to the North's official KCNA news agency.

He said the launch was part of the country's plan to achieve "equilibrium of real force" with the U.S.

Experts believe Pyongyang's weapons program has made rapid progress under leader Kim Jong-Un, with previous sanctions having done little to deter it.

The U.N. Security Council, which has condemned Friday's launch as "highly provocative," will hold a new ministerial-level meeting Thursday on the proliferation of weapons of mass destruction, focused on enforcing sanctions on Kim's regime, diplomats said.

The meeting will be held during the annual General Assembly gathering of world leaders at the U.N. where Trump will meet with the leaders of Japan and South Korea on the sidelines to address the crisis.