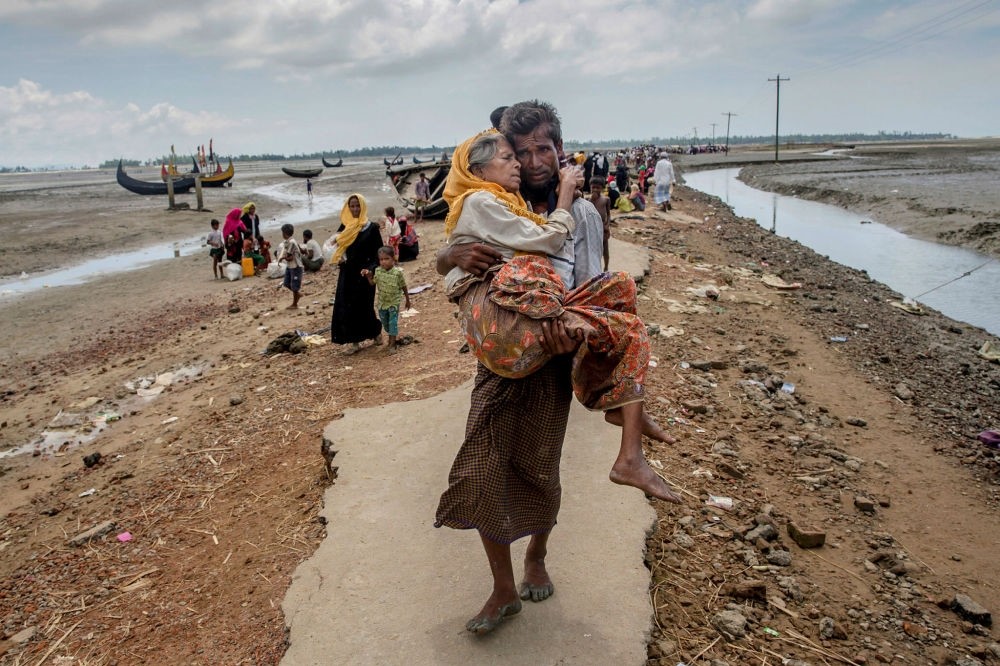 A Rohingya Muslim man walks towards a refugee camp carrying his mother after crossing over from Myanmar into Bangladesh, Sept. 16.
by Compiled from Wire Services Sep 19, 2017 12:00 am

Pressure mounts on Myanmar as a rights group urged world leaders to impose sanctions on its military, which is accused of driving out more than 400,000 Rohingya Muslims in an orchestrated ethnic cleansing campaign

Rohingya Muslims fleeing a Myanmar military offensive arrived in Bangladesh Monday with fresh accounts of violence and arson as a rights group called for sanctions and an arms embargo to stop what the United Nations has branded ethnic cleansing.

The call from the Human Rights Watch came as the U.N. General Assembly convenes in New York, with the crisis in Myanmar one of the most pressing topics.

The exodus of Rohingya refugees from mainly Buddhist Myanmar to neighboring Bangladesh has sparked a humanitarian emergency. Aid groups are struggling to provide relief to a daily stream of new arrivals, more than half of whom are children.

There are acute shortages of nearly all forms of aid, with many Rohingyas huddling under tarps as their only protection from monsoon rains.

Human Rights Watch also called for the "safe and voluntary return" of the displaced as it urged governments around the globe to punish Myanmar's army with sanctions for the "ongoing atrocities" against the Rohingyas.

"The United Nations Security Council and concerned countries should impose targeted sanctions and an arms embargo on the Burmese military to end its ethnic cleansing campaign against Rohingya Muslims," the group said in a statement.

It called on the General Assembly to make the crisis a priority, urging countries to impose travel bans and asset freezes on Myanmar officers implicated in the abuses, as well as to expand arms embargoes.

Myanmar's army was hit with sanctions during its 50-year rule of the country. Most have been lifted in recent years as the generals have allowed a partial transition to democracy.

The latest wave of violence in western Myanmar's Rakhine State began on Aug. 25, when Rohingyas attacked police posts and an army camp, killing about 12 people.

The Myanmar military response has sent more than 410,000 Rohingya Muslims fleeing to Bangladesh, escaping what they and rights monitors say is a campaign aimed at driving out the Muslim population.

Tens of thousands of Rohingyas have sheltered in refugee camps in Rakhine since communal violence flared in mid-2012. The state is home to around 1.2 million Rohingyas, who have long been officially labelled Bengali, suggesting they are illegal immigrants from Bangladesh.

Despite having lived in the area for generations, Rohingyas were effectively denied citizenship with a 1982 nationality law and have restricted basic rights such as freedom of movement.

According to the law, foreigners cannot become naturalized citizens of Myanmar unless they can prove a close familial connection to the country.