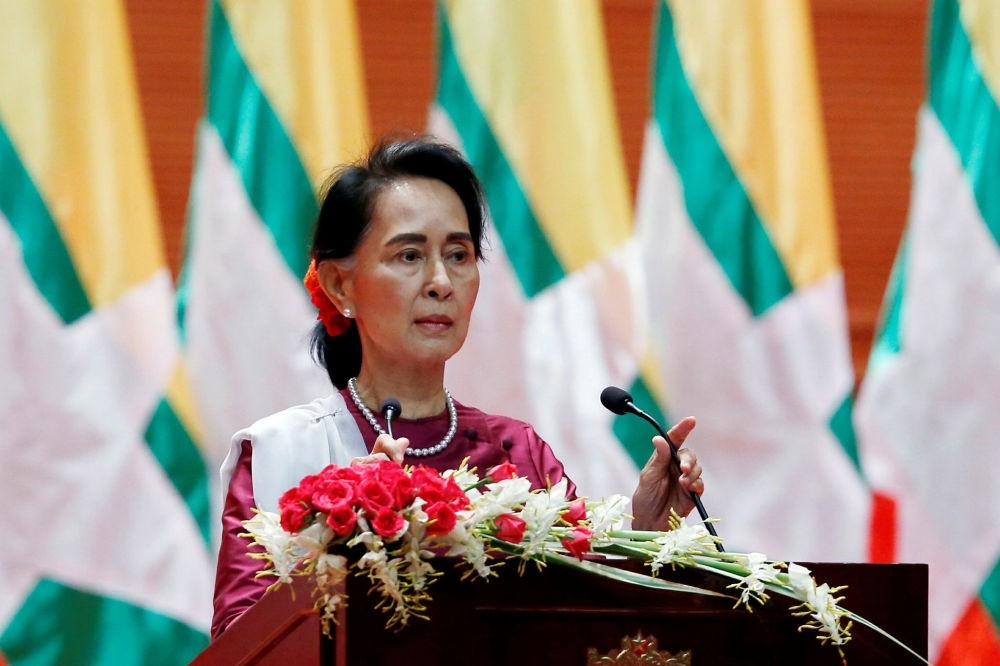 Myanmar's Aung San Suu Kyi delivers a televised speech to the nation at the Myanmar International Convention Center in Naypyitaw, Sept. 19.
by Compiled from Wire Services Sep 20, 2017 12:00 am

Myanmar's Aung San Suu Kyi rebuffs foreign criticism of the Rohingya crisis, refuses to blame the military for the violence that has driven some 421,000 of the Muslim minority out of the country

With a mass exodus of Rohingya Muslims sparking accusations of ethnic cleansing from the United Nations and others, Myanmar leader Aung San Suu Kyi said Tuesday that her country does not fear international scrutiny and invited diplomats to see some of the areas for themselves. Though an estimated 421,000 Rohingyas have fled to Bangladesh in less than a month with their villages burned and hundreds killed, Suu Kyi said the "great majority" of Muslims within the conflict zone stayed and that "more than 50 percent of their villages were intact." The Nobel Peace laureate's global image has been damaged since Aug. 25 when the violence started.
​
Rohingyas fled their villages in the military crackdown that followed, and many of their villages have been burned. The government has blamed the Rohingya themselves, but members of the persecuted minority have said soldiers and Buddhist mobs attacked them.

Suui Kyi's first address to the nation since the violence erupted came days after she canceled plans to attend the U.N. General Assembly, a decision widely seen as a response to international criticism.

Aung San Suu Kyi and her government are "burying their heads in the sand" over the violence in Rakhine state, Amnesty International said yesterday, criticizing Myanmar's leader for failing to condemn the army's abuse against the Muslim population in a televised speech.

The U.N., rights groups, and a tide of Rohingya refugees pouring into Bangladesh have accused Myanmar's military of using bullets and arson to wage an "ethnic cleansing campaign" against the Muslim minority.

In her speech yesterday, Suu Kyi expressed sympathy for the "suffering of all people" swept up in the violence but did not address accusations of ethnic cleansing. She instead said only that anyone guilty of rights abuses would be brought to justice.

The rights group blasted Suu Kyi for remaining "silent about the role of the security forces," whom they have accused of being "eng

aged in a campaign of ethnic cleansing."

The watchdog also criticized Suu Kyi's call for international observers to visit Myanmar to assess its troubles for themselves, citing her government's blocking of a U.N. fact-finding mission to probe alleged army atrocities in Rakhine.

"Aung San Suu Kyi's claims that her government 'does not fear international scrutiny' ring hollow [...] If Myanmar has nothing to hide, it should allow U.N. investigators into the country, including Rakhine state," Amnesty said.

Meanwhile, there is growing concern on behalf of the international community, regarding Rohingya Muslims being wiped off Myanmar's map.

"This is the worst crisis in Rohingya history," said Chris Lewa, founder of the Arakan Project, which works to improve conditions for the ethnic minority, citing the monumental size and speed of the exodus. "Security forces have been burning villages one by one, in a very systematic way. And it's still ongoing."

Using a network of monitors, Lewa and her agency are meticulously documenting tracts of villages that have been partially or completely burned down in three townships in northern Rakhine state, where the vast majority of Myanmar's 1.1 million Rohingyas once lived. It's a painstaking task because there are hundreds of them, and information is almost impossible to verify because the army has blocked access to the area. Satellite imagery released by Am

The Arakan Project has found that almost every tract of villages in Maungdaw township suffered some burning, and that all of Maungdaw has been almost completely abandoned by the Rohingyas.

Of the 21 Rohingya villages in Rathedaung, to the north, only five were not targeted. Three camps for the Rohingya people who were displaced in communal riots five years ago also were torched.

Though members of the ethnic minority first arrived generations ago, they were stripped of their citizenship in 1982, denying them almost all rights and rendering them stateless. They cannot travel freely, practice their religion, or work as teachers or doctors, and they have little access to medical care, food or education.

The U.N. has labeled the Rohingya one of the world's most persecuted religious minorities. Violence erupted in Myanmar's Rakhine state on Aug. 25 when the country's security forces launched an operation against the Rohingya Muslim community. It triggered a fresh influx of refugees toward neighboring Bangladesh, though the country sealed off its border to refugees. The region has seen simmering tension between its Buddhist and Muslim populations since communal violence broke out in 2012.