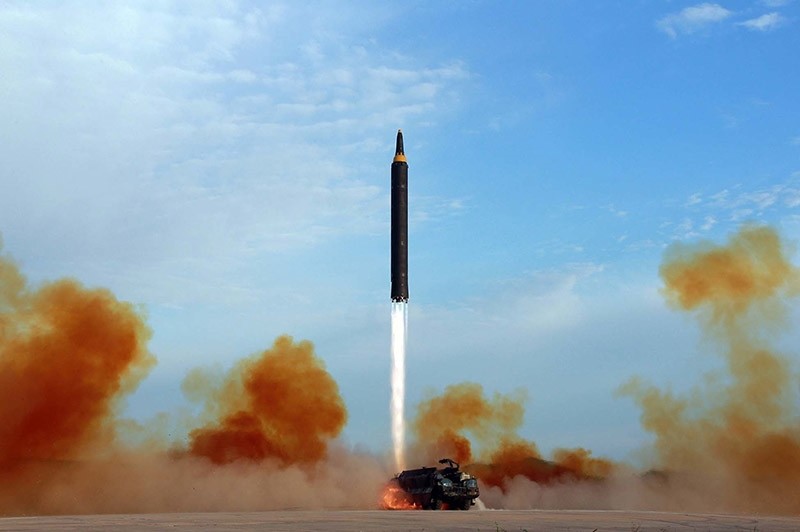 This undated file photo distributed by the North Korean government shows what was said to be the test launch of an intermediate range Hwasong-12 in North Korea. (AP Photo)
by Sep 23, 2017 12:00 am

China's earthquake administration said on Saturday it had detected a magnitude 3.4 earthquake in North Korea that was a "suspected explosion", raising fears the isolated state had conducted another nuclear bomb test.

The administration said in a statement on its website that the quake, which occurred around 0830 GMT, was recorded a depth of zero kilometers.

Previous quakes from North Korea have indicated nuclear tests by the reclusive state, the most recent earlier this month.

The earthquake was detected in Kilju county in North Hamgyong Province, where North Korea's known Punggyeri nuclear site is located, according to South Korea's meteorological agency.

The agency said it was analyzing the nature of the quake and its initial view was that it was a natural tremor because no sound waves specific to man-made earthquakes were detected.

China's official Xinhua news agency said the epicenter was roughly at the same place as a similar shallow earthquake on Sept. 3, which turned out to be caused by North Korea's sixth and largest nuclear test.

There was no immediate reaction from China's Foreign Ministry.

Tensions have continued to rise since North Korea carried out its sixth nuclear test, prompting a new round of U.N. sanctions.

North Korea's Foreign Minister Ri Yong Ho, currently in New York for a United Nations meeting, warned on Thursday that Kim could consider a hydrogen bomb test of an unprecedented scale over the Pacific.