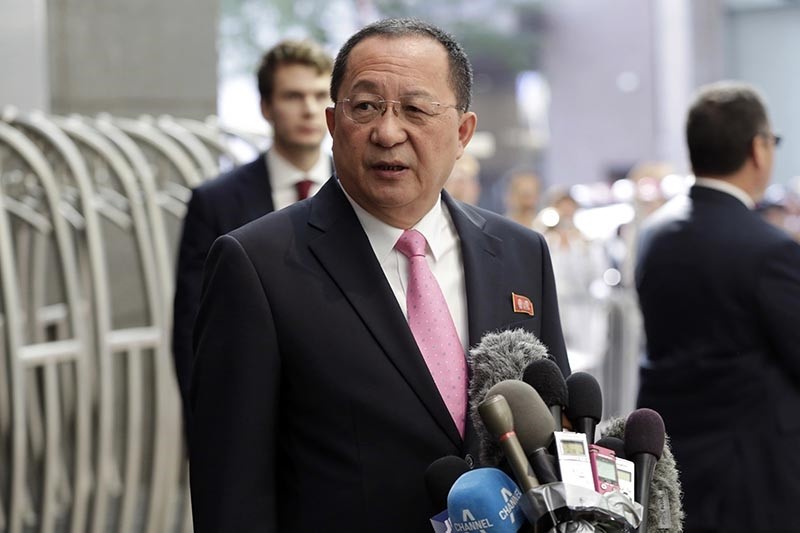 North Korea's foreign minister said on Monday that U.S. President Donald Trump had declared war on North Korea and that Pyongyang reserves the right to take countermeasures, including shooting down U.S. strategic bombers even if they are not in the country's air space.

"The whole world should clearly remember it was the U.S. who first declared war on our country," Foreign Minister Ri Yong Ho told reporters in New York.

"Since the United States declared war on our country, we will have every right to make countermeasures, including the right to shoot down United States strategic bombers even when they are not inside the airspace border of our country."

"Trump claimed our leadership would not be around much longer," North Korean Foreign Minister Ri Yong-ho told reporters outside his hotel in New York. "He declared a war on our country."

Ri, who made the remarks before leaving New York where he had attended last week's U.N. General Assembly, made the statement then returned from his car to the press microphones to add: "In light of the declaration of war by Trump, all options will be on the operations table of the supreme leadership of the DPRK (Democratic Peoples Republic of Korea)."

His words echoed warnings from the Trump administration that all options were on the table in dealing with North Korea's nuclear and missile development and its threats to have a weapon capable of reaching the continental United States.

On Saturday, Ri told the U.N. General Assembly that targeting the U.S. mainland with its rockets was inevitable after "Mr Evil President" Trump called Pyongyang's leader a "rocket man" on a suicide mission.

"Just heard Foreign Minister of North Korea speak at U.N. If he echoes thoughts of Little Rocket Man, they won't be around much longer!" Trump said on Twitter late on Saturday.

North Korea has pursued its missile and nuclear programs in defiance of international condemnation and sanctions.