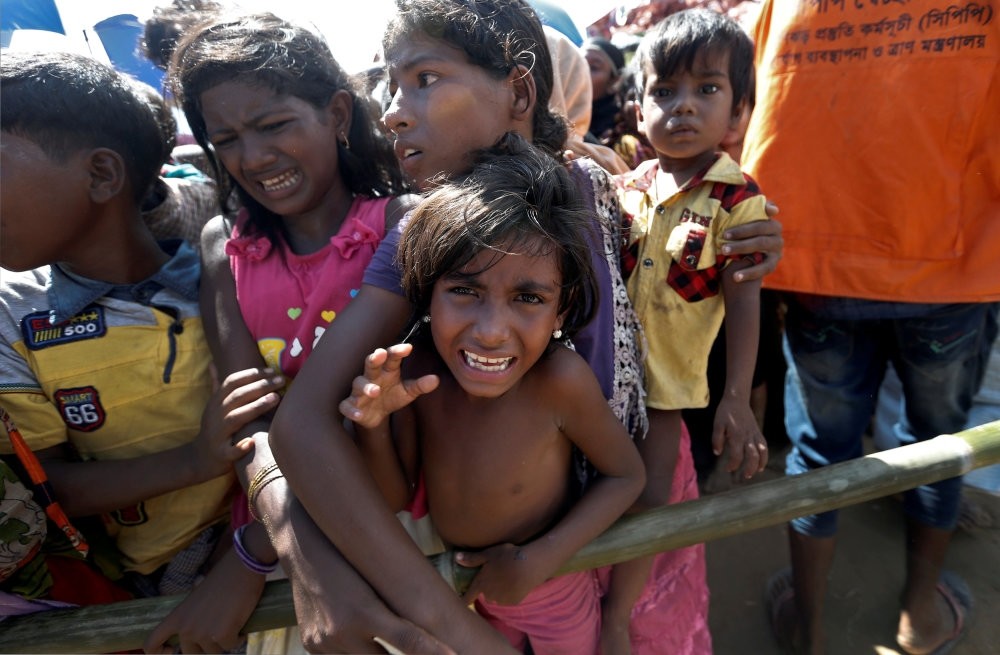 A Rohingya refugee girl reacts as people wait to receive aid in Cox's Bazar, Bangladesh.
by Daily Sabah with Reuters Sep 26, 2017 12:00 am

Muslim refugees seeking shelter in Bangladesh from ‘unimaginable horrors' in Myanmar face enormous hardships and risk a dramatic deterioration in circumstances unless aid is stepped up, the head of the U.N. refugee agency said Monday

The United Nations seeks more aid to Rohingya Muslims who flee to Bangladesh from what Muslims describe as ethnic cleansing. The international body's refugee agency says they face risk of worsening of their situation if the aid is not increased. The violence in western Myanmar's Rakhine State and the refugee exodus is the biggest crisis the government of Nobel laureate Aung San Suu Kyi has faced since it came to power last year in a transition from nearly 50 years of military rule.

It has also threatened to drive a wedge in the Association of South East Asian Nations (ASEAN), with Muslim-majority Malaysia disavowing a statement on the Myanmar situation from the bloc's chairman, the Philippines, as misrepresenting "the reality".

U.N. High Commissioner of Refugees Filippo Grandi told a news conference in Bangladesh that "solutions to this crisis lie with Myanmar".

But until then, the world had to help the "deeply traumatized" refugees facing enormous hardship, whom he had met on a weekend visit to camps in southeast Bangladesh.

"They had seen villages burned down, families shot or hacked to death, women and girls brutalized," Grandi said.

He called for aid to be "rapidly stepped up" and thanked Bangladesh for keeping its border open.

Buddhist-majority Myanmar regards the Rohingya Muslims as illegal immigrants from Bangladesh. Fighting between Muslim insurgents and government forces has flared periodically for decades.

The United Nations has described a sweeping military response as ethnic cleansing, with refugees and rights groups accusing Myanmar forces and Buddhist vigilantes of violence and arson aimed at driving Rohingya out.

The United States has said the Myanmar action was disproportionate and has called for an end to the violence.

Members of Myanmar's small Hindu minority appear to have been caught in the middle.

Some have fled to Bangladesh, complaining of violence against them by soldiers or Buddhist vigilantes. Others have complained of being attacked by the insurgents on suspicion of being government spies.

Authorities have found the bodies of 45 Hindus buried outside a village in the north of Rakhine State, a government spokesman said, and they were looking for more.

A search was mounted after a refugee in Bangladesh contacted a Hindu community leader in Myanmar to say about 300 ARSA militants had marched about 100 people out of the village on Aug. 25 and killed them, the government said.

Access to the area by journalists as well as human rights workers and aid workers is largely restricted and Reuters could not independently verify the report.

An ARSA spokesman dismissed the accusation that the group had killed the Hindus, saying Buddhist nationalists were trying to divide Hindus and Muslims.

"ARSA has internationally pledged not to target civilians and that remains unchanged, no matter what," the spokesman, who is based in a neighboring country and identified himself only as Abdullah, told Reuters through a messaging service.

The government spokesman, Zaw Htay, said Myanmar had asked Bangladesh to send Hindu refugees home. Suu Kyi has said any refugee verified as coming from Myanmar can return under a 1993 pact with Bangladesh.A Reuters reporter in Bangladesh said Rohingya refugees were still arriving there, with about 50 seen on Monday.

In a public display of discord within ASEAN, of which Myanmar is a member, Malaysia disassociated itself from a statement issued by group chair the Philippines as it misrepresented the situation and did not identify the Rohingya as one of the affected communities.

Myanmar objects to the term Rohingya, saying the Muslims of Rakhine State are not a distinct ethnic group.

This month, Malaysia summoned Myanmar's ambassador to express displeasure over the violence, as well as grave concern over atrocities.