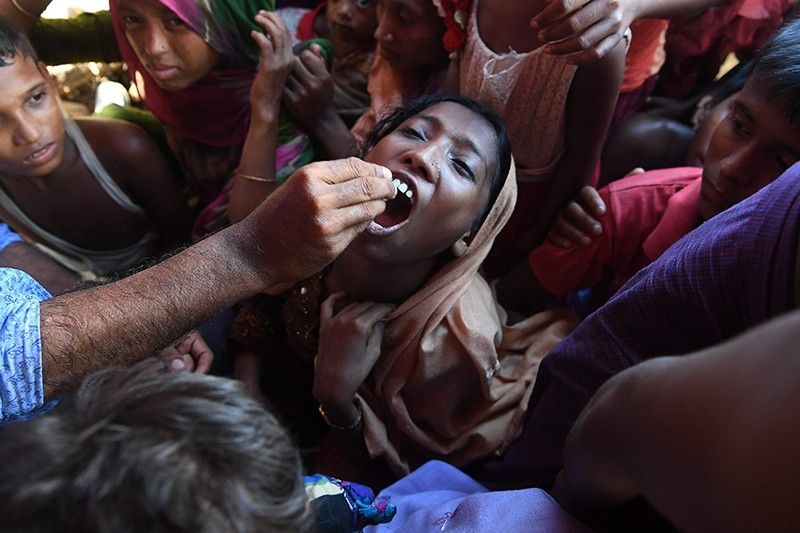 A Rohingya refugee receives an oral cholera vaccine from a Bangladeshi volunteer at the Thankhali refugee camp in Ukhia district on Oct. 10, 2017. (AFP Photo)
by Compiled from Wire Services Oct 10, 2017 12:00 am

The United Nations launched one of its biggest ever cholera vaccination drives in the vast refugee camps of southeast Bangladesh on Tuesday amid fears of an outbreak among nearly a million Rohingya now living there.

Thousands of Rohingya men and women lined up in intense heat at makeshift health centers on Tuesday, many with young children in their arms, to receive the oral vaccine against the disease.

The U.N. is working with the Bangladesh government to vaccinate 650,000 people living in the sprawling camps against cholera, which spreads through dirty water and can kill if left untreated.

"When we have this kind of situation, there's a heavy possibility of a cholera outbreak."

Nearly 520,000 Rohingya Muslims have arrived in Bangladesh since late August, fleeing a military crackdown in neighboring Myanmar that the U.N. has said likely amounts of ethnic cleansing.

Poor and overpopulated Bangladesh has struggled to cope with the mass influx of people, many of whom have to travel for days or even weeks to reach safety and arrive exhausted and malnourished.

The influx had slowed in recent weeks, but now appears to have picked up again. An estimated 10,000 new refugees arrived on Monday.

World Health Organization workers supported by around a thousand local volunteers plan to vaccinate 650,000 Rohingya over the coming weeks.

They will follow up with a second dose of the vaccine for an estimated 250,000 children aged between one and five. Those under one will not be vaccinated.

It is thought to be the second biggest such campaign ever, after 800,000 people were immunized against the disease in Haiti in November.

Volunteers at the Thankhali camp used loudhailers to appeal to refugees to go to the centers, where they queued to have the vial placed in their mouths.

"The health workers told us we would be better with medicines, that we wouldn't have any more diseases," said Nabi Hossain, a 35-year-old refugee who arrived at the camp two weeks ago, as he queued with two of his sons.

Abdus Salam, a senior health official with the local government, said workers would go door to door to ensure no refugees were left out of the drive.

The Rohingya are a stateless Muslim minority who have long faced persecution in Myanmar, which regards them as illegal immigrants from Bangladesh.

Bangladesh has allocated land to accommodate some 800,000 refugees in one massive camp, but the U.N. has warned that such a large concentration in one area could promote the spread of disease.

In a dysentery clinic in Kutupalong camp run by the Medical Teams International group, patients with severe diarrhea lie motionless, moaning as intravenous fluid flows into them.

"I believe we are facing a tsunami. We just don't know if it's going to be 10 feet or 50 feet," said Bruce Murray, a physician at the clinic.

"Cholera is known to be endemic in Bangladesh and now we are bringing in half a million people in squalid conditions and it's got to be inevitable. It's a matter of when it hits, rather than if," he said.

Murray said there could be "tens of thousands" of victims in an outbreak. Paranietharan said his organization had the capacity to handle 70,000 cholera cases.

As well as a handful of clinics, mobile teams are ready to go to inaccessible parts of the camps with oral rehydration salts that can save cholera patients if they can't get access to intravenous fluids.

Aid workers worry they lack the staff to get the vaccines out quickly, while the WHO says it urgently needs $10.2 million to do the job properly.