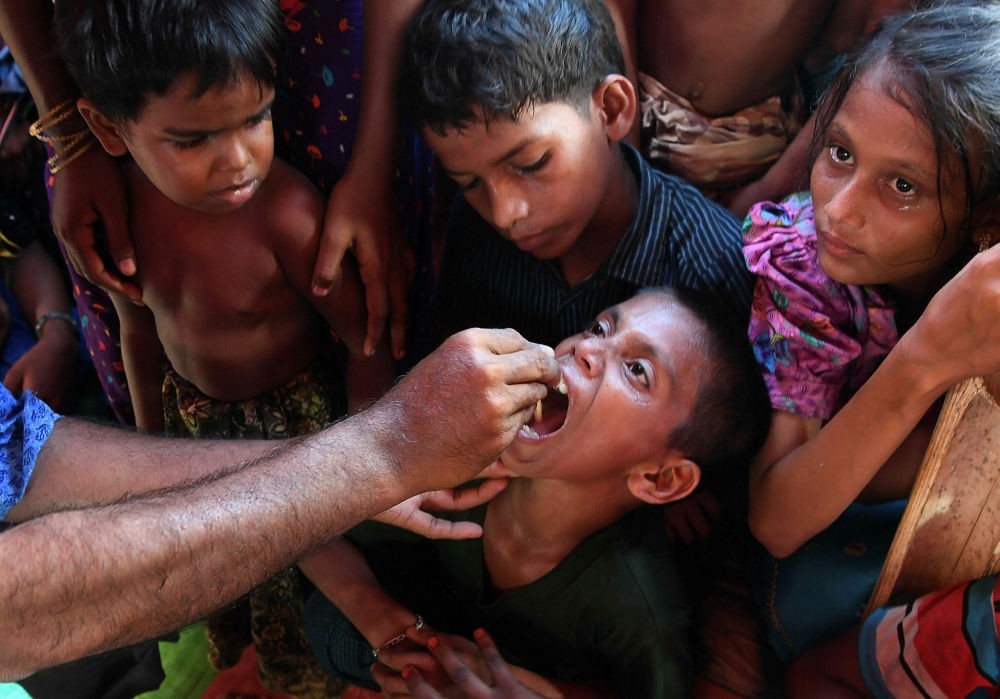 Rohingya refugee children look on as a Bangladeshi volunteer administers an oral cholera vaccine at the Thankhali refugee camp in Ukhia district, Oct. 10.
by Compiled from Wire Services Oct 11, 2017 12:00 am

The World Health Organization (WHO) began distributing 900,000 doses of cholera vaccine yesterday in Bangladesh's camps for Rohingya refugees fleeing from Myanmar, as authorities rush to prevent a major outbreak of the deadly disease. They will follow up with a second dose of the vaccine for an estimated 250,000 children aged between one and five. Those under one will not be vaccinated. It is thought to be the second biggest such campaign ever, after 800,000 people were immunized against the disease in Haiti in November. Thousands of Rohingya men and women lined up in intense heat at makeshift health centers yesterday, many with young children in their arms, to receive the oral vaccine against the disease.

More than 10,000 cases of diarrhea have been reported in the past week alone, the WHO said. Doctors in two clinics have told Reuters that there have been several cases of patients with the symptoms of cholera, a virulent diarrhea that kills within 36 hours if not treated. Cholera has not been identified in testing of patient samples by Bangladesh's health ministry, although clinics say they are waiting for results for some samples sent last week.

"There is a clear risk for cholera," said Dr N. Paranietharan, the WHO's representative in Bangladesh. "Sporadic cases are inevitable [but] we are not expecting a major outbreak like Yemen," he said.

In pounding heat and stifling humidity, traumatized and malnourished refugees are crammed into bamboo and canvas huts packed across muddy hillsides. Faeces lie in lanes that flood in the pouring rain. More than 3,000 latrines have been installed but many overflow and sit above pools and creeks where refugees bathe. Many new wells for drinking water are shallow and have become contaminated by sewage, said Paranietharan.

"While we are doing this vaccination, it is not an alternative to fixing the water, sanitation and hygiene intervention, it just buys us time," he said. "Sanitary facilities and hygiene promotion have still not met the standards. They need to be improved quickly."

Nearly 520,000 Rohingya Muslims have arrived in Bangladesh since late August, fleeing a military crackdown in neighboring Myanmar that the UN has said likely amounts of ethnic cleansing. Poor and overpopulated Bangladesh has struggled to cope with the mass influx of people, many of whom have to travel for days or even weeks to reach safety and arrive exhausted and malnourished. The influx had slowed in recent weeks, but now appears to have picked up again. An estimated 10,000 new refugees arrived on Monday.

The Rohingya are a stateless Muslim minority who have long faced persecution in Myanmar, which regards them as illegal immigrants from Bangladesh. The U.N. says more than 600,000 have arrived in the last year, swelling camps that were already home to between 300,000 and 400,000 refugees. Bangladesh has allocated land to accommodate some 800,000 refugees in one massive camp, but the U.N. has warned that such a large concentration in one area could promote the spread of disease.