US flies bombers over Korean peninsula in show of force 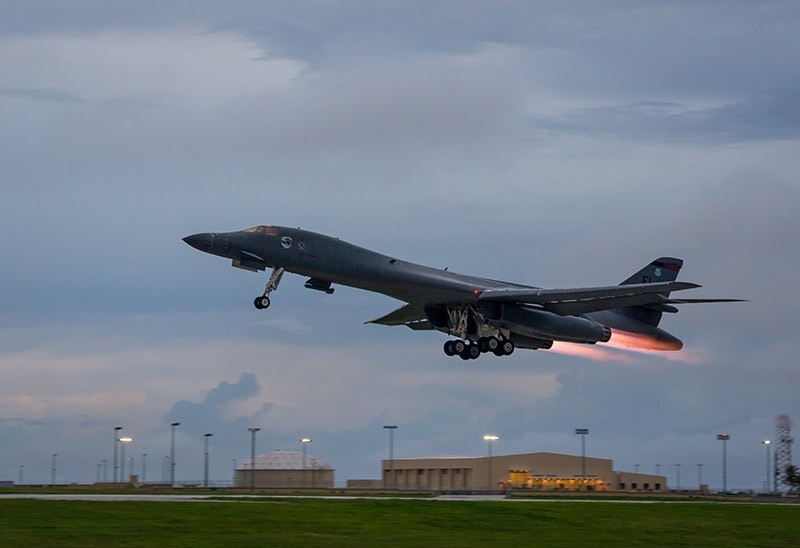 The U.S. has flown two supersonic heavy bombers over the Korean peninsula in a show of force against Pyongyang, staging the first night-time joint aviation exercises with Japan and South Korea.

Two B-1B Lancers based in Guam flew a mission in the vicinity of the Sea of Japan late Tuesday, the U.S. Pacific Air Forces said in a statement.

"Flying and training at night with our allies in a safe, effective manner is an important capability shared between the U.S., Japan and the Republic of Korea and hones the tactical prowess of each nations' aviators," Major Patrick Applegate said in a statement.

The four aircraft then flew across the peninsula and staged another round of a firing exercise over the Yellow Sea before the two B-IBs returned home, the South Korean Joint Chiefs of Staff (JCS) said.

"This drill was part of a routine deployment training aimed at enhancing deterrence" against the North's nuclear threats, the JCS said in a statement.

"Through the practice this time, South Korean and U.S. air forces showed off the allies' resolve for strong retaliation against North Korea's nuclear and missile threats," it added.

The B-1Bs also conducted exercises with Japan's Air Force in what the US statement called a "sequenced bilateral mission".

South Korean and U.S. government officials have been raising their guard against more North Korean provocations with the approach of the 72nd anniversary of the founding of North Korea's ruling party, which fell on Tuesday.

Trump hosted a discussion on Tuesday on options to respond to any North Korean aggression or, if necessary, to prevent Pyongyang from threatening the United States and its allies with nuclear weapons, the White House said in a statement.

Trump was briefed by Secretary of Defense James Mattis and Chairman of the Joint Chiefs of Staff General Joseph Dunford at a national security team meeting, the statement said.

In May, an investigative team inside the defense ministry announced the hack had been carried out by North Korea, but did not disclose what kind of information had been taken.

The United Nations Security Council, which has imposed a series of ever tighter sanctions on North Korea, has banned four ships from ports globally for carrying coal from North Korea, including one vessel that also had ammunition.

The vessels are the first to be designated under stepped-up sanctions imposed on North Korea by the 15-member council in August and September over two long-range ballistic missile launches and Pyongyang's sixth and largest nuclear test.

China, North Korea's main ally and trading partner, has consistently argued sanctions alone will not work, urging Washington and Pyongyang to lower their rhetoric and return to the negotiating table.

China's influential Global Times tabloid expressed alarm at how far the rhetoric on both sides had gone and how it had increased the risk of a "fatal misjudgment".

"The international community won't accept North Korea as a nuclear power. North Korea needs time and proof to believe that abandoning its nuclear program will contribute to its own political and economic advantage. This positive process is worth a try," the paper said in an editorial late on Tuesday.

"War would be a nightmare for the Korean Peninsula and surrounding regions. We strongly urge North Korea and the U.S. to stop their bellicose posturing and seriously think about a peaceful solution," it said.